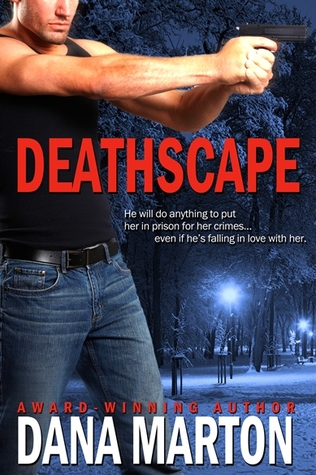 Title Deathscape Broslin Creek Series Book 2
Author: Dana Marton
Stars 5 out of 5Review:Ashley Price is doing everything she can do to get her life on track after a near death experience. Her Daughter Maddie was taken away form her by her father who wants his artist daughter to move home so he can take care of her properly but all Ashley wants to do is go back to the way things were before she started painting dark imagines.Detective Jack Sullivan moves from city to city trying to find the serial killer who killed his older sister when he was thirteen years old and refuses to stop chase the man even if it mean to dying in the process. When Ashley saves Jacks life after Brady Blackwell killed him he is more determined than ever to find and the man and kill him.With most Romantic Suspense novels someone has to be damaged but this time both characters have dark past that make it difficult to live in the present. Ashley lost a child in her care and Jack lost his sister at a young age. From the first page to the last page you really wonder if they will be ever be able to get over what happened to them.  Yes they get a Happier Ever After but not before a lot of personal struggle giving the book a more realistic side compared to other book in this genre.NOW this could be considered Spoiler Alert because after all this book is a fast pace mystery so don't read on. I warned you!Ashley has visions of death that she has to paint otherwise she will be in pain until she does. Jack finds Ashley trying to destroy her painting because she is afraid that the police will think she is a killer but instead of burning them Jack keeps each one unable to decided if she is a killer until he watches her in action.  These scene the author paints are interesting because she doesn't make it supernatural but at the same time it has a supernatural feeling until Jack and Ashley figure out why she is having these vision of death which make it really believable in the end. Now she isn't Psych because she doesn't save lives she only paints death which is a nice switch for a change.You will guess Blackwell but only when the author is ready for you to figure it out and I think if the reader is paying pretty good attention they will figure out who it is early on.  Watching the character tip toeing around each other is fun and the birthday scene is really funny and had me laughing because I have little girls. I love that she didn't have the characters jump in the sack right away which is a nice change because recently it feels like a lot of Romantic Suspense novels has everyone jump in bed together after a few meetings and very graphic sex scenes which this book doesn't have. There are quite a few secondary characters that you find yourself caring for and hope they find their happy endings as well in the small town of Broslin Creek. Since I didn't read the first book I never once felt lost in the second book. I enjoyed this book and quite honestly I couldn't put it down because the mystery had me pulled in from page one.
I can't remember if this book was sent me to or I bought it.

Synopsis:  After a near-death experience, artist Ashley Price is compelled to paint visions of the dead, and fears she's gone crazy. Then she paints a man buried alive and, recognizing the surroundings, she rushes to save him.

Instead of being grateful to her for rescuing him, Detective Jack Sullivan accuses her of being in league with a serial killer. He swears he will put her behind bars. Except, the more time he spends with her, the more he falls under her spell. Can he trust her, or is he walking into another deadly trap?

Author Information:  Dana Marton writes fast-paced action-adventure romances that take her readers all over the globe. She is a Rita Award finalist and the winner of the Daphne du Maurier Award of Excellence. She loves writing stories of intrigue, filled with dangerous plots that try her tough-as-nails heroes and the special women they fall in love with. Her books have been published in seven languages in eleven countries around the world.