Book Review: Hearts of the Missing: A Mystery by Carol Potenza 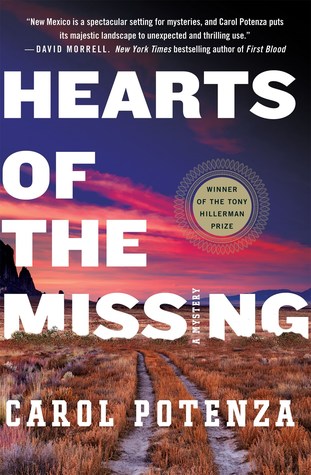 Title: Hearts of the Missing

Review:
Hearts of the Missing is a police procedural story that isn't able to find the right flow making the story feel jerky and a little too messy. The story throws readers right in with very little back story that could cause readers to becomes lost at times with who does what and why.  The characters at times lack focus for being police which makes the story once again a little too stop and go feeling.
While the story its selves is interesting giving readers a in-depth look at fire-Sky customs as was as Native Americans traditions it gets lost in the stories inability to flow.
Thank you to Netgalley and the publisher  Minotaur Books for the advance copy of Carol Potenza Hearts of the Missing.

Synopsis:
When a young woman linked to a list of missing Fire-Sky tribal members commits suicide, Pueblo Police Sergeant Nicky Matthews is assigned to the case. As the evidence leads her to a shocking discovery, she uncovers not only murder but an ominous, vengeful twist that strikes at the very core of what it means to be a member of the Fire-Sky People. With an intimate knowledge of Fire-Sky customs and traditions, the killer ensures the spirits of those targeted will wander lost forever. As Nicky closes in on the murderer, those closest to her are put in jeopardy. She realizes she must be willing to sacrifice everything--her career, her life, and even her soul--to save the people she is sworn to protect.

A biochemistry professor at New Mexico , Carol decided to write for something to do after her kids went off to adulthood. Hearts of the Missing is her debut novel. It won the Tony Hillerman  in 2017. She keeps busy teaching biochemistry and writing the next book in the Nicky Matthews series which will always include (1) science twisted into science 'fiction', (2) some paranormal because a  of her relatives are 'sensitive' (she is not) and have GREAT ghost stories that she weaves into the fabric of her books, and--of course--(3) murder.
Posted by H. Wimmer at 12:00 AM