Book Review: He Is Watching You by Charlie Gallagher 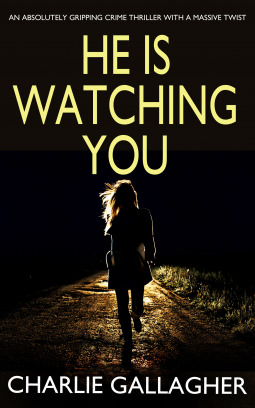 Title: He Is Watching You

Review:
The lead characters are like Oil and Water and will take some time getting used to the way they react to each other.  This story is dark and the killer is sadistic with the treatment and killing of the woman he takes.   The characters have dept but readers might struggle with relating to the lead characters.
Thank you to Netgalley for a Copy of Charlie Gallagher He Is Watching You.


Synopsis:
A young woman’s body is left in a metal container in a remote location. The killer is careful to position her under a camera that links to his smartphone. He likes to look back at his work.HE IS WATCHING HER. BUT SHE ISN’T DEAD.So he will go back to finish the job. He can barely contain his excitement at the thought of getting to do it all over again. But he must be careful. He cannot rush. Rushing makes you careless.Detective Maddie Ives is new to the area. She is handed a missing person report: a young woman with a drink problem who’s been reported missing fifteen times. It looks like a waste of time. But DS Ives has a bad feeling about the woman’s disappearance.DI Harry Blaker is called to a hit and run of an elderly man left to die on a quiet country road. There is no motive and it looks like a tragic accident. But he’s been working Major Crime long enough to know that something isn’t quite right. The two officers find their investigations intertwine and they will need to work together.

Charlie Gallagher has been a serving UK police  for eleven years. During that time he has had many roles, starting as a front-line response officer, then a member of a specialist tactical team and is currently a detective investigating serious offences.
Posted by H. Wimmer at 9:50 AM