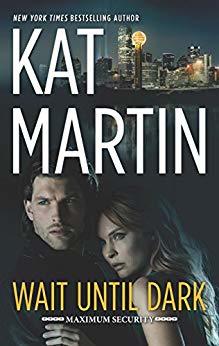 Review:
Who would have guessed how short this story is.  It starts off with a dead body, hot guys, bad guys and lots of crazy moments. Kat Martin know how to wet your appetite craving more of her newest series Maximum Security.
This is a great starting point to an must read author.
Thank you Netgalley and the publisher Harlequin Books for a copy of Kat Martin Wait Until Dark.


Synopsis:
Private investigator Jonah Wolfe knows trouble when he sees it. So when April Vale storms into his office at Maximum Security, all his warning signs flash red. April’s been accused of murder, except she has no memory of how she woke up in her coworker’s bed—drenched in his blood, as he was shot with her gun. As the campaign manager for the mayor, April’s job and life are on the line if she doesn’t figure out who’s trying to frame her. But the clock is ticking, and the pair must find the murderer…before April winds up dead.

About The Author:
Kathleen Kelly was born on 14 July 1947 in the Central Valley of California, USA. She obtained a degree in Anthropology and also studied History at the University of California in Santa Barbara. She was a real estate broker, when she met her future husband, Larry Jay Martin. A short time after the two became acquainted, Larry asked her to read an unpublished manuscript of an historical western he'd written. Kat fell in love with both the book and the author! Then, after doing some editing for him, she thought she'd try her own hand at writing. She moved on to become a full time writer.

Published since 1988, she singed her books with her married name, Kat Martin, but she also used two pseudonyms: Kathy Lawrence for a book in collaboration with her husband Larry Jay Martin, and Kasey Mars for her first contemporary romances. The New York Times bestselling writer, among her many awards, has won the prestigious RT Book Review Magazine Career Achievement Award. To date, Kat has over eleven million copies of her books in print. She has been published in seventeen foreign countries, including England, South Africa, Spain, Argentina, Germany, Italy, Greece, Norway, Sweden, Russia, Bulgaria, China, and Korea.

Currently residing with her husband, a Western-writer and photographer, in Missoula, Montana, USA. But when they are not writing, they also enjoy skiing and traveling, particularly to Europe.

"I've always loved books. I was an avid reader, with any number of my own stories rolling around in my head. Writing them down seemed a logical step."

"I love anything old," Kat says. "I love to travel and especially like to visit the places where my books are set. My husband and I often stay in out-of-the-way inns and houses built in times past. It's fun and it gives a wonderful sense of a by-gone era."
Posted by H. Wimmer at 12:00 AM