Monday in my mailbox....what's in yours?

A house shrouded in time.

A line of women with a heritage of loss.
As a young bride, Susannah Page was rumored to be a Civil War spy for the North, a traitor to her Virginian roots. Her great-granddaughter Adelaide, the current matriarch of Holly Oak, doesn’t believe that Susannah’s ghost haunts the antebellum mansion looking for a pardon, but rather the house itself bears a grudge toward its tragic past.
When Marielle Bishop marries into the family and is transplanted from the arid west to her husband’s home, it isn’t long before she is led to believe that the house she just settled into brings misfortune to the women who live there.
With Adelaide’s richly peppered superstitions and deep family roots at stake, Marielle must sort out the truth about Susannah Page and Holly Oak— and make peace with the sacrifices she has made for love.    Sent for review.

Three lives are bound by a single book . . . and the cleansing waters of Molasses Creek.
Having traveled to the ends of the earth as a flight attendant, Ally Green has finally returned to the Lowcountry to bury her father as well as the past. But Vesey Washington is still living across the creek, and theirs is a complicated relationship--he was once her best friend . . . and also part of the reason she's stayed away so long. When Ally discovers a message her father left behind asking her to quit running, it seems her past isn't through with her yet.

As Ally's wandering spirit wrestles with a deep longing to flee again, a young woman on the other side of the world escapes her life of slavery in the rock quarries of Nepal. A mysterious sketchbook leads Sunila Kunari to believe there's more to her story than she's ever been told, and she's determined to follow the truth wherever it leads her.

A deep current intertwines the lives of these three souls, and a destiny of freedom, faith, and friendship awaits them all on the banks of Molasses Creek.   Sent for review. 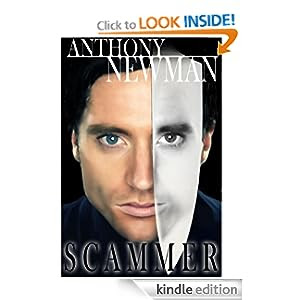 Jeff Mendelson's world is turned upside down when his Ponzi scheme is discovered by his investors and they seek revenge. He is in a race against time as he and his friend Mark venture off to secure the money he's been hiding in order to secure his future before he is finally caught. Along the way he runs into other shady people who know what he is hiding and want a piece of the action. All types of villains come out of the woodwork as Jeff battles to save himself from his own mistakes and greed. Scammer is a fast paced, suspenseful story, packed with twists and turns in every chapter.  Sent for review.