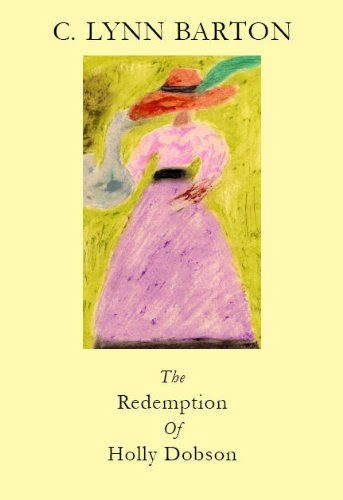 Title:    The Redemption of Holly Dobson
Author:  C. Lynn Barton
Review:    I really do not know what to think about this book, it was way beyond strange and I only finished reading it because it was in the car and it was the only book I had to read while waiting for the kids after school. I would never have finished it otherwise, but I get bored waiting and one of the kids likes to play on the playground for a good 1/2 hour after school is out...lots of time to read then.
Strange story with strange people and strange experiences also lots of strange killings and strange deaths. I wondered if maybe Holly was just mentally ill and dreamed all of this up and the author would tell the reader that at the end, but no. It is a weird story with very little transition between years, places and themes. Holly is evil and good and yet evil and yet good all at the same time. The dialog is stilted and jumpy but the story is the same. There is little to no flow and I felt at times my brain was being sucked out of my skull while reading this. But then again I did keep reading it.
I really cannot say a good thing about this book, it didn't make much sense and even at the end I really am not sure what was going on or went on for that matter. Murder, living forever, angels, gypsies, cave dwellers, wealth, poverty, gambling, farming, lots of sex, evil, devil, God, vampires, werewolves, pedophiles, priests, popes, foster parents, cell phone that tell people what to do and they do it, this book is so strange and I really didn't care for it and like I said I really don't understand what I just read...not any of it besides the part about her willingness to do anything for her family. But even with that she went way over the top...believe me...she did.
Maybe if this was a story you went and listened to in person, maybe it would have made more sense... storytellers really need to be heard and enjoyed live. All I can really say is that this book was strange...and not in a good way.
Publisher:  Published September 30th 2010 by Dark Willow Books
Copyright: 2010
Pages:  252…a long 252
ISBN: 9780615349411
Quick Review:  1 Stars out of 5.
Why I Read it:  The author was looking for reviewers to read this book.
Where I Obtained the Book:  Sent by the author.
Synopsis:  Holly Dobson possesses an understated benevolent evilness. She is relentlessly driven by her unbreakable sense of family values. Holly acts with remorseless conviction to protect her own regardless of the consequences. Her only son is a demonic, charismatic, and curiously engaging being. The quintessential evil which George Dobson personifies sets Holly on a path that spans continents, decades, and the landscape of her very soul. Along the way, Holly discovers her purpose and finds redemption as a mother, a woman, lover, and ultimately something more than a mere human being.

Author Biography:
C. Lynn Barton (Storyteller) was born in Houston, Texas and adopted by her parents. Growing up was not without its challenges. She was on a constant search for identity and purpose. It was this pursuit of self which drove her to become a special education teacher of students with behavioral disabilities. While working as a teacher, her passion for storytelling evolved into something she wanted to do professionally. Writers like Shirley Jackson inspired her to use short stories to comment on the ills of society and demonstrate the complexities of human behavior. However, it is her resounding belief that all of humanity has enough goodness to always triumph over adversity and hardship.
Horror is her favorite genre to read and it became the best outlet for the characters which haunted her to listen to their stories. She has the rare ability to conceptualize her stories from beginning to end before writing the first word. C. Lynn says the characters tell the tales and she is blessed to write down what they need to say. Horror has also allowed her the opportunity to use fear as a catalyst for fostering what she hopes will assist someone in the betterment of their personal humanity. She believes her tales are entertaining and cautionary musings about living. Writing is an art form by which she can explore and relate to others the real life horror that impacts us all.
C. Lynn does not identify herself as an author or writer. She prefers to describe herself as a storytelling artist. The most important aspect of her tales is how someone feels after a story is read. She seeks emotionality from the characters and says she will write as long as they continue to talk. Her writing has been described as positively unique.
Many of C. Lynn's family members and friends will claim that she is the most interesting person they've ever met. With an uncanny intuitive ability, they've said she always knows what to say in the right time and in the best place. Once you've read one of her tales, it is easy to become hooked on the writings of this masterful storyteller. It is C. Lynn’s goal that every reader of her tales knows a little more about themselves after reading her writings.
C. Lynn Barton is a storyteller of true to life horror or things that can go terribly bad. She writes these cautionary tales to suggest that anything is possible in the life of a human being. It is her opinion that the horror genre can be used to solicit fear and entertain. C.Lynn utilizes it to show that anything can go wrong at anytime and in anyone's life. After all, most human beings are doing their best to live a good life. Her tales often include aspects of recovery from difficulty, emancipation, womanhood, and empowerment. She wouldn't claim to be all knowing. However, it brings her immense joy to show every person just how strong, nurturing, intelligent, and proud we all can be. It is her opinion that humanity is made of strength and endurance just because we are the only one's who can usher another living human soul unto the plant we call Earth.
As an intuitive guide and life coach, she occasionally writes poetic reflections on life and daily living, but she wouldn't describe herself as a poet. Her musings are rhythmic reflections on any given topic. At least, that is how she sees it. Although writing is something she enjoys, it is her gift and ability to understand humanity and human nature which drives the writing.
I realized my intuitive ability as a young child. It was very easy for me to determine situations and circumstances before they occurred. I didn’t look for the information as it was something I simply knew to be true.
My knowledge is particularly accurate in regards to the personal lives of individuals. I am drawn to their personal struggles for which I simply know how to help someone manage it. I don’t know why I was given this ability. However, I’ve given advice to family, friends, and strangers on just about every topic that could come to mind. In the past, I was reluctant to share my gift with anyone who needed it, but I had to eventually accept my path which is always intertwined with my existence.
For a very long time, I have thought everyone had my ability even if it was somehow untapped. I continue to believe it is true for most human beings who’ve remained close to the voice of our universe.
C. Lynn Barton is a wife and mother of two young children. She resides in Chicago.
Other Reviews:
Deborah's Reviews
Shelf Indulgence
Genre Go Around
Posted by Unknown at 1:31 AM