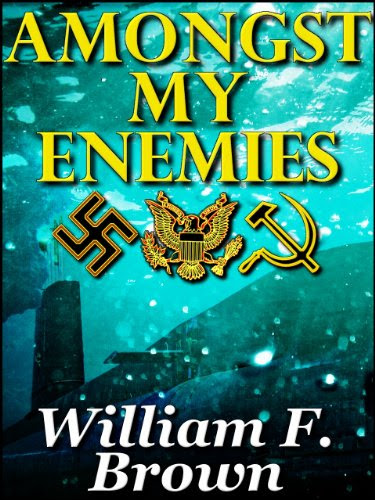 Title:  Amongst My Enemies
Author: William F. Brown
Review:   This is a great story about after WW II and human condition.  We are introduced to Mike Randall, the unlikely hero of the story, and we are taken on his journey to right the wrongs created by the war.  The author has created a very broken man who you feel for and only want him to find peace.  You also meet other amazing characters from the SS Officer Heinz Kruger to the old Viking Einar Person. When the story starts we see Mike and his best friend Eddie working in the bitter cold forced labor camps in Konigsber, slowly dying.  After  Eddie's death,  Mike vows revenge for his best friend.  We read how Mike escapes and ends up on a U-Boat where the adventure begins.  After years of Mike struggling with survivor's guilt, he finally goes back to the United States to Eddie's home and there we meet two very lovable characters. Eddie's good Old Southern Dad and his very outspoken sister Leslie. Mike helps the family out and slowly falls in love with Leslie, but than a turn of events take him away from Leslie and off to NYC.  At this point in the book I was worried it would turn into a romance, but thankfully the author stays true to the characters and Mike is still trying to deal with his survival guilt.
When Mike arrives in New York City, the action picks up and the author makes sure you don't want to put the book down.  We are again introduced to several characters but this is when the book start to feel really modern with the chase and escape scenes.  After doing my own research I learned everything the author wrote was true to the time. I had no idea in WWII silencers were used on pistols.  Amazing what you can learn when reading a book of fiction.
The adventures continue to Sweden and the search for the U-Boat.  Everyone is after the boat and its treasure it might hold. I personally feel this is where it is easy to get a little bored as the author jumped back and forth between several different characters.  Even good books have their slow parts and the jumping back and forth between Mike, his story, and than to the Russians slowed the pace of the book down a little.  Again the author brings us one the most evil characters in this book, the SS Officer Heinz Kruger, who even scared me and I wasn't sure who would live and who would die.   At some points in the book I wanted to yell at Mike and say "How can you not tell he's evil?!"


The book ends with Mike taking his revenge and the reader can only hope he finally found his peace and can become a new man.
This book was a fast paced thriller and kept me on the edge of my seat from beginning to end. I couldn't put it down so if you are someone who loves intrigue, fast paced adventures this novel is perfect for you.  I completely enjoyed this read from beginning to end and I'm grateful I had the chance to read it.  I can't wait to read more from this author.
Thanks for this wonderful review Heidi.
Publisher: Published December 12th 2011
ISBN: B006LAOIWY
Copyright: 2011
Pages: Kindle Edition
Quick Review: 5 stars (out of 5)
Why I Read It:  Sent by the author for review to our reviewer Heidi.
Synopsis: Inside an old German U-Boat rusting on the bottom of the Baltic are millions in gold bars, stolen art, and a secret that could tear NATO apart. The only one who knows the truth is Mike Randall, a battle-scarred American who survived four months in the frozen Hell of northern Germany at the end of the war. When he does speak up, he puts a target on his own forehead, one which the Russians, the West Germans, the U-boat's former owners, the Israeli Mossad, and even his own government quickly take aim at. Some want the gold, some want him dead, and some want proof about a high-ranking spy inside NATO itself. Randall's wants are much simpler. Caught between the Kremlin and a new, deadly, 4th Reich, he wants revenge and to satisfy some old debts with a steel-jacketed bullet.

Author Biography: I'm the author of 6 mystery and suspense novels, and 4 award-winning screenplays. Amongst My Enemies is my second e-book. It is a fast-paced Cold War adventure filled with international intrigue, espionage, revenge, and an old German U-boat filled with a fortune in gold bars, treasure, and a secret that will tear NATO apart.
The Undertaker, my first e-book, is a snarky, fun, fast-paced domestic thriller with a slug of humor, romance, and stark terror! Someone with a sharp scalpel and an embalming table is planting bodies und other people's names. If Pete Talbott doesn't stop them, he'll be next on the list. Published in February 2011, it has already garnered 16 Five-Star and 13 Four-Star book reviews.
Thursday at Noon is a Joan Kahn Book published by St. Martin's Press in hardback, in paperback by Harlequin's Gold Eagle, and in various foreign editions. It is set in Egypt in 1962 and deals with murder, espionage, an Army coup, and new rockets aimed at the heart of Israel. Reviewed favorably in the "New Yorker" and other major publications, it will be released as an e-book in early 2012. Beaufort Books published my first novel, The Allah Conspiracy in hardback. It deals with international terrorism and an attempt to kill the President, and will also be released as an e-book in 201, as will Winner Lose All, a new international suspense novel set in the closing months of WWII, as one war winds down and all eyes are on the next one. As alliances begin to shift, old enemies become tomorrow's friends, and everyone wants their piece of the revolutionary new German weapons technologies.
In addition to the novels, I've written four award-winning screenplays. They have won First Place in the suspense category of the Final Draft contest, Finalist in Fade In, First Place in the Screenwriter's Utopia -Screenwriter's Showcase Awards, Second Place in the American Screenwriter's Association, Second Place at Breckenridge, and others. One was optioned.
A native of Chicago, I live in Columbus Ohio and occasionally escapes the keyboard with landscape painting and golf. My wife and travel widely in Russia, Italy, Germany, the Caribbean, England, Ireland, Scotland, eastern Europe, Egypt, and Israel.
Other Reviews:
The Ends of the Pen
Bill Brown Writes Novels
The Best Reviews
Posted by Unknown at 1:06 AM