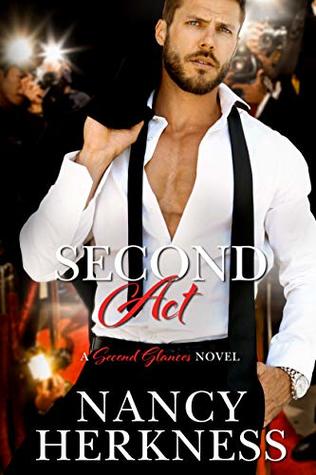 Review:
Second Chance is cheesy over the top story that lacks any conflict that is needed in someway to drive a the story forward.
The writing and story line isn't bad it just unbelievable as well as a slow pace story that drags on though out the book.
Thank you Netgalley and the publisher Montlake Romance for the advance copy of Nancy Herkness Second Act.

Jessica Quillen, veterinarian for the charitable K-9 Angelz program, didn’t mean to stumble into the middle of a New York movie shoot. She just wanted to rescue the stray dog she’d been chasing. Instead, she’s playing catch-up with her ex-fiancé—and the screen’s hottest action hero, Hugh Baker. The only man she ever loved. The dream that disappeared. The heartthrob who’s now hoping for a “take two.”

Seeing Jessica triggers emotions Hugh has tried to forget. Abandoned by his mother to foster care, he still struggles to feel worthy of love and to open his heart to a woman. His biggest mistake was not trusting Jessica. It was his fault she left. All he wants now is to make up for lost time. But he has to prove that she can trust him.

Though the sparks still smolder, he’s still Hollywood—a world far away from Jessica’s. Now it’s up to her to give their love story a happily ever after.

Nancy Herkness is the author of the award-winning Whisper Horse series, published by Montlake Romance, as well as several other contemporary romance novels. She is a two-time nominee for the Romance Writers of America’s RITA® award. Her new series, Wager of Hearts, follows the romantic adventures of three very wealthy men who make a life-changing bet. Nancy is a member of Romance Writers of America, New Jersey Romance Writers, and Novelists, Inc. She has received many honors for her work, including the Golden Leaf Award, the Maggie Award in Contemporary Romance, and the National Excellence in Romance Fiction Award. She graduated from Princeton University with a degree in English literature and creative writing.A native of West Virginia, Nancy now lives in suburban New Jersey with her husband, two mismatched dogs, and an elderly cat.
Posted by H. Wimmer at 12:00 AM