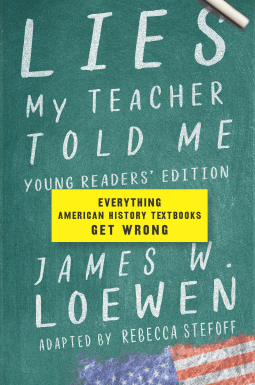 Title: Lies My Teacher Told Me for Young Readers: Everything American History Textbooks Get Wrong

Review:
As a history nut this book is a great read but it reads like a history text book that will turn off many readers.
Many part of history are in fact boring which will be skipped over by teachers or completely ignored.  Which can cause  misinformation or history being lost to the winner instead of the defeated.  This book tries to get to the root of all stories.
This is a great recourse book for any history nuts or anyone teaching history to children and teens.
Thank You to Netgalley and The Publisher The New Press for the advance copy of Lies My Teacher Told me.

Synopsis:
Lies My Teacher Told Me is one of the most important—and successful—history books of our time. Having sold nearly two million copies, the book won an American Book Award and the Oliver Cromwell Cox Award for Distinguished Anti-Racist Scholarship. Now Rebecca Stefoff, the acclaimed nonfiction children’s writer who adapted Howard Zinn’s bestseller A People’s History of the United States for young readers, turns Loewen’s beloved work into Lies My Teacher Told Me for Young Readers.
Essential reading in our age of fake news and slippery, sloppy history, Lies My Teacher Told Me for Young Readers cuts through the mindless optimism and outright lies featured in most textbooks. Beginning with pre-Columbian history and then covering characters and events as diverse as Helen Keller, the first Thanksgiving, the My Lai massacre, 9/11, and the Iraq War, Loewen’s lively, provocative telling of American history is a “counter-textbook that retells the story of the American past” (The Nation).
Like the original, this streamlined and abridged version for young readers is rich in vivid details and quotations from primary sources. Lies My Teacher Told Me for Young Readers brings this classic text to a new generation of readers (and their parents and teachers) who will welcome and value its honesty, its humor, and its integrity.


James Loewen's gripping retelling of American history as it should, and could, be taught, Lies My Teacher Told Me, has sold more than 1,500,000 copies and continues to inspire K-16 teachers to get students to challenge, rather than memorize, their textbooks.
Jim Loewen taught race relations for twenty years at the University of Vermont. Previously he taught at predominantly black Tougaloo College in Mississippi. He now lives in Washington, D.C., continuing his research on how Americans remember their past. Lies Across America: What Our Historic Sites Get Wrong came out in 1999. The Gustavus Myers Foundation named his book, Sundown Towns, a "Distinguished Book of 2005." In 2010, Teachers College Press brought out Teaching What Really Happened, intended to give K-12 teachers (and prospective teachers) solutions to the problems pointed out in Loewen�s earlier works.
As the Sesquicentennial of the Civil War approached, Loewen asked thousands of K-12 teachers in workshops and audiences about its cause(s).  Depressed at their replies, he recruited a co-editor and published The Confederate and Neo-Confederate Reader (University Press of Mississippi, 2010), which sets the record straight in Confederates' own words.
His other books include Mississippi: Conflict and Change (co authored), which won the Lillian Smith Award for Best Southern Nonfiction but was rejected for public school text use by the State of Mississippi, leading to the path breaking First Amendment lawsuit, Loewen et al. v. Turnipseed, et al. He also wrote The Mississippi Chinese: Between Black and White, Social Science in the Courtroom, and Lies My Teacher Told Me About Christopher Columbus.
Posted by H. Wimmer at 12:00 AM