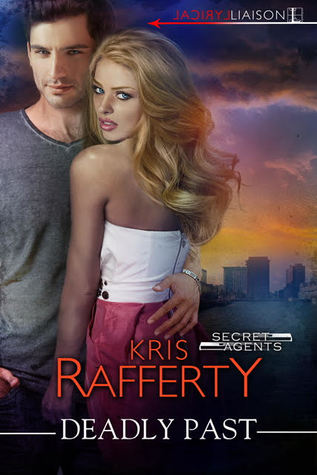 Review:
Deadly Past starts off with a bang but soon slows down to a snails pace as Cynthia is being pushed around by Charlie her best friend she kissed. the story again picks up its pace only to slow down once again giving readers a unfocused roller coaster ride that can't seem to figure out where it is going,
Readers will questions the female lead who is suppose to be all about the rules but starts to break them before the story gets off the ground.  With that in mind the story lacks focus and isn't true to the characters the author paints.  Trust me you will be reminded many times how Cynthia is a rules follower and how out of character this is for her throughout the story to the point readers will want to yell we get it she follows the rules but this one times she decides to break every single one of them.
With that in mind the story isn't able to keep readers focus as the two characters negative the world they have been thrown into.
The story has the romance readers who love romantic suspense stories. The story falls flat many times having readers struggle though what feels like repeated story line.
Thank you to Netgalley and the publisher Lyrical Liaison for the advance copy of Kris Rafferty's  Deadly Past

Synopsis:
Cold, hard facts are what make or break a case for the FBI. But when there’s evidence that one of their own has been turned, there’s more on the line than the truth. There are personal bonds that can be stretched to the limit . . .After blacking out, a discharged weapon and hazy memories put FBI profiler Cynthia Deming at the scene of a crime: the execution of six federal witnesses against the mob. The one and only person she can turn to for help is her best friend, Boston forensic pathologist Charlie Foulkes. It’s a relationship that no one on her team knows about—and it’s about to be tested by danger and desire . . .Charlie knows that Cynthia is no killer. But as they embark on a shadow investigation to clear her name, evidence surfaces implicating him. With the conviction of a mob boss hanging in the balance, they’ll have to uncover who’s framing them to take the fall, and what lines they’re willing to cross—in their professional and personal lives—to prove that nothing will tear them apart.

Born in Cambridge, Massachusetts, I am the youngest of four in a rambunctious Irish-American family. I became obsessed with books young, and still retain an image in my mind of the first book I took out of the library. I completed my first short story during “rest period” in first grade, first novel at eighteen, first rejection at eighteen…it took me a long time to believe I could be a writer, and longer to convince anyone else. Meanwhile, I filled the time earning my BA at U/Mass Boston, married the love of my life (who is also the baby of his family), had three perfect children (that I could wax poetic about for days, and often do), and got my third degree black belt in Parker Kenpo Karate (a life-changing event that took over a decade of challenging my mind and body). I’m a staunch advocate for people empowering themselves, emotionally and physically, to be their best selves, to not rely on others to keep them safe in a world that is not safe. And I believe creating/playing music is the closest thing to creating life that doesn’t eventually lead to diapers and drool. I play classical piano, love summer road trips, am a fanatic for warm water ocean, and one of my favorite things to do is to say I’ll start exercising tomorrow.