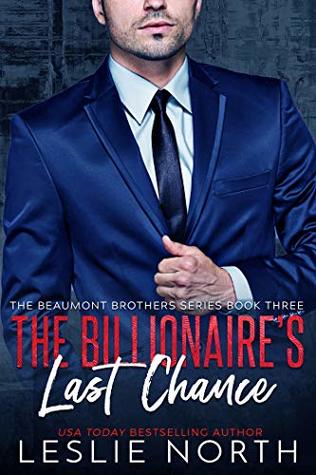 Review:
Leslie North is a hit or miss for me.  I have read a lot of her different series and I can't say there is one I am in love with.  However sometimes within her series I find a gem I fall in love with.  Either the Characters, Story, or just her writing style.  This time it was the banter between the two lead characters was fun, moved with ease throughout the story and written perfectly.  Readers know the ending of the story before they get close to the end and yet the this story will keep readers hook.  Connall Beaumont, is a little to perfect but hey its a romance right.  Bernadette is the perfect blend of humor, femininity with her giggles and girl next door charm.  All in the background of a Billionaire who can have anything, anyone and be anywhere.

I usually avoid these stories because of how cheesy they tend to be.  Yet here I am singing the books praises.  Yes there is hot sex scenes but it flows into the story naturally.

This is a stand a lone or read as part of the series readers will not be left behind with what they choose.

Synopsis:
Connall Beaumont, CEO and COO of B3 Motors, needs a wife in less than two months or he will lose the business he and his brothers have spent years building. Connall never expected that the stunningly beautiful woman he met at a bar is the daughter of the lawyer who’s executing his grandfather’s will—a will Connall would do just about anything to get his hands on in order to save his company and the livelihoods of the people who work for him. If putting his hands on a beautiful woman will get him closer to that goal, then he’s game. Besides, there’s something about Bernadette Rowland that has him thinking she could be more than just a pawn in his grandfather’s game. Bernadette wasn’t looking for a man, but when Connall inserted himself into her life, she didn’t put up much of a struggle. He’s sexy and smart and seems genuinely interested in her work as a wolf researcher. Bernadette can’t resist his charm and before long, she’s swept up into a world far away from the isolation and loneliness of the Montana wilderness. But just when she thinks she’s found someone who could be her mate for life, she discovers the real reason he’s been piling on the charm, and their perfect romance crumbles. Can two people who are worlds apart find happiness together or are they each destined for life as a lone wolf?

Or spend a wonderful weekend with SIX full-length, highly rated Leslie North novellas for FREE! Sign up for free books here: http://leslienorthbooks.com/sign-up-f...Leslie North is the pen name for a critically-acclaimed author of women's contemporary romance and fiction. The anonymity gives her the perfect opportunity to paint with her full artistic palette, especially in the romance and erotic fantasy genres. The truth of the matter is she loves her fictional persona, Leslie North, more than her normal, day-to-day persona! Her bestselling books focus on strong characters and particularly women who aren't afraid to challenge an alpha male. Inspired after years of travel, her stories are set all over the world, from the tough streets of Russia to the beautiful beaches of the middle east. Leslie fell in love with romance when she first picked up a scrappy, dog-eared romance book from her local library. She began writing soon after and the rest, as they say, was history. She now lives in a cozy cottage on the British coast and enjoys taking long walks with her two Dalmatians, George and Fergie. She LOVES reader feedback, and if you have any comments, don't hesitate to contact her on Goodreads.I'm Social Too:Twitter: @leslienorthbookWebsite: www.leslienorthbooks.comFacebook: www.facebook.com/leslienorthbooks
Posted by H. Wimmer at 12:00 AM