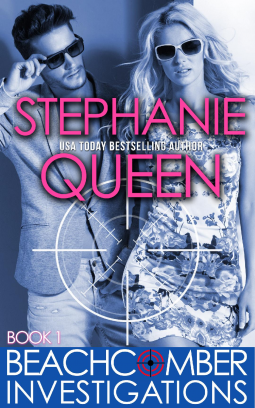 Review:
Beachcomber Investigation is a blend of sexual tension, mystery, mix of odd and fun characters that bring laughs, fun and story that readers will not want to put down.
Dane is ex special ops and Shana is an Aussie surfer chick and ex-Scotland Yard detective. The author is able to make the love hate relationship work without leaving readers rolling their eyes at some of the lines.  Instead readers will find they the characters are perfect blend of the classic TV PI shows.
I can't wait to pick up the next in the series.


Thank you to Netgelly for a copy of Stephanie Queen Beachcomber Investigations.

Synopsis:
A romantic detective series novelEx-special ops legend Dane Blaise is desperate to recruit Shana George away from Scotland Yard to partner with him in his new venture, Beachcomber Investigations. She has impressive skills and if he’s honest, he needs her to keep him grounded. But most of all, Dane wants to keep Shana on the island of Martha's Vineyard because he can't get past his insane longing for her.Shana’s boss David Young forces her to decide on the spot when he assigns an important case to Beachcomber Investigations. She chooses to partner with Dane, going with her gut--or more accurately her heart--rather than her brains. They may be good partners in crime-fighting, but they are all wrong for each other in every other way possible. He's soulless and lost and likely has more wounds from his past than the bullet and knife scars scorching his body. But she's crazy. About him.Their big assignment is to protect Dane's old special ops buddy, Acer. They need to find whoever paid a sniper to take a shot at Acer--before the sniper takes another shot and doesn't miss.Dane and Shana need to be on top of their game to keep Acer alive, and not on top of each other. But each of them is secretly worried whether that’s possible--and worried about what will happen if it’s not.

Stephanie Queen has always been a writer–ever since second grade when the Nuns of Sacred Heart School got her hooked by offering fame–though not fortune–when she won first prize in their story contest. That was her first publishing gig.
Since then Stephanie kept writing in the background while she built up a catalogue of life experiences. She went to UConn, got married had two sons who could star as heroes in any lucky girl’s romance story, got a Masters degree at Harvard University, worked a few jobs–Math teacher, Keebler Elf and desk jockey at various cubicle farms doing bureaucratic things. Then she finally put writing stories back into the foreground.
Since then, Stephanie has published more than twenty-five novels and novellas. She teaches a class in novel writing and also speaks at libraries, conferences and workshops on writing and publishing.
“One of my all-time favorite things in the world is to hear from readers who enjoy my books. I love to write back, too. If you email me, I will reply!”