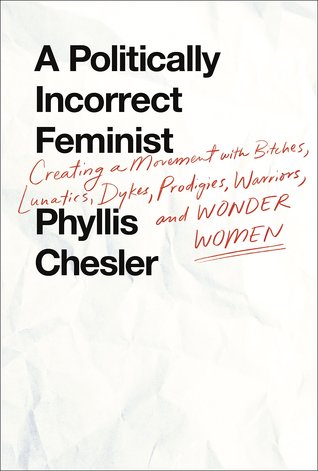 Review: (Not so much a review as a Opinion Piece mixed with a Review)
I have very strong review about Feminism.  I believe Feminism started to give women a choice but today it seems to have taken on a different voice. Where the women who choose say to stay home and raise a family is looked down upon by those who choose a the work force Vice versa.  I have found the word Feminist or Feminism to be almost a curse word depending on the circle of friends I belong to while others cheer and hold strong to that name.
I decided to review this book because I wanted to full understand what a person who was around for the beginning of feminism and what she has seen and witness.
What I enjoyed was the Authors ability to see men as part of Feminism as they helped women worked side by side women.  She deadicated this book to men and women.
The author makes it very clear this book isn't about the Rise or Second Rise of Feminism it is about a daughter of working poor immigrants and she hopes it will help and guide others.
Phyllis Chesler covers everything from her childhood to being help captive in Kabul in the 1960's and what she witnessed during her time.

"Sisterhood is Powerful."  That is a strong statement when all sisters are willing to listen to one another view and accept that they might not always agree but will still be sisters. However I have learned that is not always the case and very experienced it many times myself.
A Politically Incorrect Feminist is an interesting history from he view point of Phyllis Chesler. While I don't agree with everything she has to say I can't doubt the experiences she has lived and the women she has fought for.

The reason for 3 stars is she focuses on the voices of women fought loudly, with violence and doesn't focuses on the woman who fought quickly and within their homes and with their little girls like my mother did.

(My sisters Have Masters Degree in Education, Phd in Education, Lawyer, and a Dietitian. While I might not have a degree my voice is no less quite and my knowledge no less equal to their when it comes to the experiances of life.

As someone who was raised by a stay at home mother who told her 4 daughters they could be anything they wanted to be. She showed me how to be strong fight for what I know to be right while still being a woman and respecting those around me whether Males or Female.  I was raised to respect women who choose different from the decision I choose. I had a job at the age of 12 and had a many different jobs until my first child turned a year old.  At that point I had to make a decision. I wasn't a great employee and I wasn't being a great mom either. I knew I had to choose and it wasn't easy for me.  I finally decided to stay at home.  I have 4 children and I am raise my boys to respect women and their authority and I am raising my girls that they can do and be whoever they want to be.

Feminism gave women a choice.  When we make that choice we become part of a sisterhood but in that sisterhood we need to respect those who decided differently from us.  I am raising a my children to be respectful men and women. My boys will open door for everyone and my girls will open doors for everyone and they will all do it with respect of those around them.  Men and Women are not equal but we have the ability to use our difference to become equals in the world.  A man isn't above a woman and a Woman isn't above a Man.  When we do that we fail as a society.


Synopsis:
Phyllis Chesler was a pioneer of Second Wave Feminism. Chesler and the women who came out swinging between 1967-1972 integrated the want ads, brought class action lawsuits on behalf of economic discrimination, opened rape crisis lines and shelters for battered women, held marches and sit-ins for abortion and equal rights, famously took over offices and buildings, and pioneered high profile Speak-outs. They began the first-ever national and international public conversations about birth control and abortion, sexual harassment, violence against women, female orgasm, and a woman’s right to kill in self-defense.Now, Chesler has juicy stories to tell. The feminist movement has changed over the years, but Chesler knew some of its first pioneers, including Gloria Steinem, Kate Millett, and Andrea Dworkin. These women were fierce forces of nature, smoldering figures of sin and soul, rock stars and action heroes in real life. Some had been viewed as whores, witches, and madwomen, but were changing the world and becoming major players in history. In Memoir of a Politically Incorrect Feminist, Chesler gets chatty while introducing the reader to some of feminism's major players and world-changers.

is an American writer, psychotherapist, and professor emerita of psychology and women's studies at the College of Staten Island (CUNY). She is known as a feminist psychologist, and is the author of 16 books, including the best-seller Women and Madness (1972). Chesler has written on topics such as gender, mental illness, divorce and child custody, surrogacy, second-wave feminism, pornography, prostitution, incest, and violence against women.
Posted by H. Wimmer at 12:00 AM