Book Review: American Fix: Inside the Opioid Addiction Crisis - and How to End It by Ryan Hampton 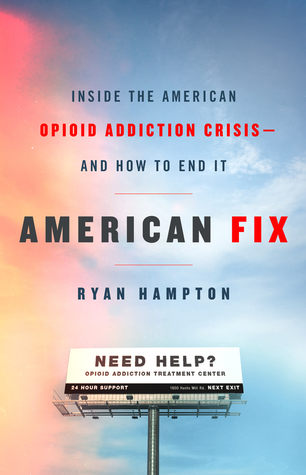 Review:
This book is hard hitting facts that will rip off the band aid people have been using to fix the Opioid Addiction that is killing Americans and destroying families.
Ryan Hampton has a view point unlike many other who have written or dicuses the opioid addiction because he has an addiction to Opioiod and this is his candid story as well as passion to fixing what is destroy the United States.
As a read Ryan Hampton will come off angry to the point of offending those who want to hid in the sand.  Than again he has seen all side of the epidemic and witness what isn't being done. His passion can be seen as angry but it is passion to fix the problem and not hide from it.
I remember hearing as a teen Marijuana is the grate way drug but really the grate way drug is sitting in most american's homes and used all the time.
This is a must read!
https://www.drugabuse.gov/drugs-abuse/opioids/opioid-overdose-crisis
"
Thank you to Netgalley and the publisher  All Points Books for the advance copy of Ryan Hampton  American Fix.

Thank you to Ryan Hampton for his open and candid book!

Synopsis:
Nearly every American knows someone who has been affected by the opioid crisis. Addiction is a trans-partisan issue that impacts individuals from every walk of life. Millions of Americans, tired of watching their loved ones die while politicians ignore this issue. Where is the solution? Where is the hope? Where's the outrage?Ryan Hampton is a young man who has made addiction and recovery reform his life's mission. Through the wildly successful non-profit organization Facing Addiction, Hampton has been rocketed to the center of America’s rising recovery movement—quickly emerging as the de facto leader of the national conversation on addiction. He understands firsthand how easy it is to develop a dependency on opioids, and how destructive it can quickly become. Now, he is waging a permanent campaign to change our way of thinking about and addressing addiction in this country.In American Fix, Hampton describes his personal struggle with addiction, outlines the challenges that the recovery movement currently faces, and offers a concrete, comprehensive plan of action towards making America’s addiction crisis a thing of the past.

RYAN HAMPTON serves as an  lead and recovery advocate for Facing Addiction, a national not-for-profit  to ending the addiction crisis in America. He has worked with multiple non-profits across the country and served in a staff capacity for various political campaigns. A former White House staffer, Hampton has recovered from 10 years of active heroin use. He is a leading voice in America's rising recovery movement. His interviews have appeared on NPR and HLN, and in Forbes, Slate, the Wall Street Journal, and others. He lives in California.