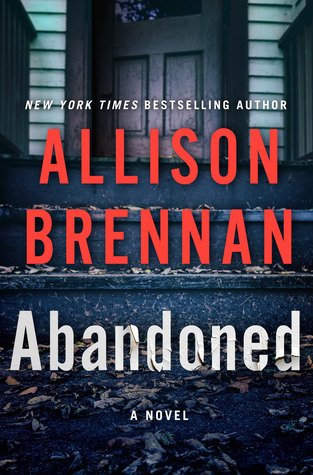 Review:
When I started to read Abandoned I had know idea it was part of a series.  This book is a stand alone novel even though it is part of a series.
Allison Brennan is able to bring readers into a world of wealth, mystery and death with just a flick of her pen. From the second Max steps food in the small town she realizes there is more to her mother than just a teen looking for a way out.
Abandoned has lots and I mean lots of characters that will be hard to keep up with sometimes. I wish I had a characters list to keep track of everyone. The author uses the terms "I like to have fun." Almost to the point of eye roll. The only disappointment was the end of the story.  It just ended even though the build up last several pages the end just ended.
That being said Abandoned is full of twist and turns readers will not be able to get enough of.  As the darker the story turns the more the readers will need to find out the truth too.
Thank you to Netgalley and the publisher for the advance copy of Allison Brennan Abandoned.

Synopsis:
Investigative reporter Max Revere has cracked many cases, but the one investigation she's never attempted is the mystery from her own past. Her mother abandoned her when she was nine, sending her periodic postcards, but never returning to reclaim her daughter. Seven years after the postcards stop coming, Martha Revere is declared legally dead, with no sign of what may have happened to her. Until now.With a single clue―that her mother’s car disappeared sixteen years ago in a small town on the Chesapeake Bay―Max drops everything to finally seek the truth. As Max investigates, and her mother's story unfolds, she realizes that Martha teamed up with a con man. They traveled the world living off Martha’s trust and money they conned from others.Though no one claims to know anything about Martha or her disappearance, Max suspects more than one person is lying. When she learns the FBI has an active investigation into the con man, Max knows she’s on the right path. But as Max digs into the dark secrets of this idyllic community, the only thing she might find is the same violent end as her mother.

New York Times and USA Today bestselling author Allison Brennan believes that life is too short to be bored, so she had five children and writes three books a year.Allison has penned more than two dozen thrillers and many short stories. RT Book Reviews calls Allison “a master of suspense” and her books “haunting,” “mesmerizing,” “pulse-pounding” and “emotionally complex.” RT also said that "The Lucy Kincaid/Sean Rogan books are getting better and better!" COLD SNAP, was a finalist for Best Thriller in the Thriller Awards (ITW) and FEAR NO EVIL (2007) and COMPULSION (2015) won the Daphne du Maurier award. Allison has been nominated multiple times for RWA's Best Romantic Suspense award, and the Kiss of Death's Daphne award.Allison lives in Northern California with her husband, five children, and assorted pets. Her current release is THE LOST GIRLS, a romantic thriller. MAKE THEM PAY will be out in March, 2017.