Book Review: Before I Met Him (DI Gravel #2) by John Nicholl 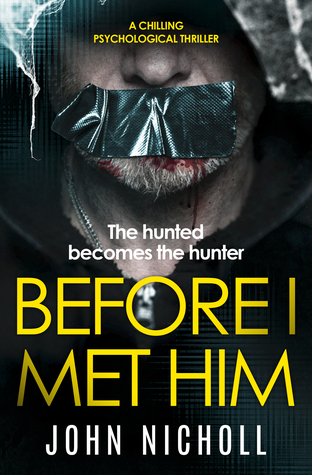 Review:
Before I Met Him is a dark psychological thriller that will stick with readers long after they put the story down.
Rebecca Smith lived though hell and decided as an adult she would make sure no child would live though the same hell.
Rebecca takes the law into her own hands and hunts the men prey on children.  The story gets very dark as she tortures, kills and dismembers the bodies of those who would pray on little children.

While Di Gravel searches for clues he has to ask himself as do readers Is Vigilante Justice ever justified?
Before I Met Him will have readers horrified at what can happen to children and how justices something is just and people are able to slip though the cracks.  This story is very dark and won't be for everyone.

The system isn't perfect which will have reader questioning everything they know.


Synopsis:
Every once in a while the hunters become the hunted...

When Rebecca's childhood abuser avoids prosecution, it sets her on a path to revenge and soon she is handing out retribution on any man who preys on the innocent.

The twenty-three-year-old poses as a child online and sets her trap, luring one predatory sex offender after another to their deaths.

When a severed head is found washed up on a windswept estuary beach, DI Gravel and his team are called in to investigate.

In what might be his toughest case yet, DI Gravel finds himself asking if vigilante justice is ever justified...

Read this chilling new psychological thriller and decide for yourself.

John Nicholl, an ex police officer, child protection social worker and lecturer, has written six darkly psychological suspense thrillers, each of which has been an Amazon # 1 bestseller.
Posted by H. Wimmer at 12:00 AM