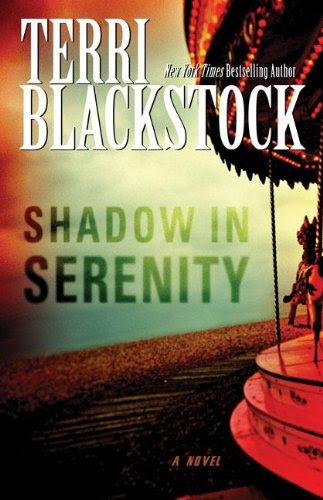 Title:  Shadow in Serenity
Author: Terri Blackstock
Review:   I enjoyed this story, the writing flowed well and kept my interest.  I read this book in one day while doing many other things.  Every time I put it down I looked forward to picking it back up.  It reminded me a bit of the musical, One Hundred Degrees in the Shade.  A con comes to town looking to make a score and instead finds more then he bargained for.  The characters were varied, especially the carnival group.  A town like Serenity sounds very much like Mayberry and I think that I would love to live in a place like that.
I find it sad that everyone is always looking for a way to make a buck.  Why?  Why can’t we be happy being middle class?  Who knows, I guess it is one of the curses of living in a place where you can be anything.  I would rather see us all happy just to be free and not so worried about making more and having more than everyone else we know.  Well this book does go into greed and how it can ruin a person and in this case maybe even a whole town.
I liked the tale that the author wove and look forward to reading more of her books.  If you enjoy a mystery(minus the murder), romance and a bit of God mixed in, I think you will find this a story to your liken’.  Give it a try, this is a good book.
Publisher: Published September 27th 2011 by Zondervan
ISBN: 9780310332312
Copyright: 2011
Pages: 352
Quick Review: 4 stars (out of 5)
Why I Read It:  Sent by the author for review.
Synopsis: Carny Sullivan grew up in the zany world of a traveling carnival. Quaint and peaceful Serenity, Texas, has given her a home, a life, and a child. Logan Brisco is the smoothest, slickest, handsomest man Serenity, Texas has ever seen. But Carny Sullivan knows a con artist when she sees one---and she's seen plenty, starting with her father. As far as Carny Sullivan can tell, she's the only one in town who has his number. Because from his Italian shoes to his movie-actor smile, Logan has the rest of the town snowed. Carny is determined to reveal Brisco's selfish intentions before his promise to the townspeople for a cut in a giant amusement park sucks Serenity dry. Yet, as much as she hates his winning ways, there is a man behind that suave smile, a man who may win her heart against her will. Shadow in Serenity is a modern-day Music Man, penned by a Christy Award-winning, New York Times bestselling author.

Author Biography: Terri Blackstock’s books have sold six million copies worldwide. Her suspense novels often debut at number one on the Christian fiction best-seller lists, and True Light, published in 2007, was number one of all Christian books—fiction and non-fiction. Known for her “Up All Night Fiction,” Terri has had over twenty-five years of success as a novelist.
In 1994 Terri was writing for publishers such as HarperCollins, Harlequin and Silhouette, when a spiritual awakening drew her into the Christian market. As she was praying about her transition, she went on a cruise and noticed that almost everyone on the boat (including her) had a John Grisham novel. It occurred to her that some of Grisham’s readers were Christians, and that if she wrote a fast-paced thriller with an added element—a strong Christian message—she might just find her niche. As God would have it, Christian publishers were just getting interested in the suspense genre, so she quickly sold a four-book series to Zondervan. Since that time, she’s written over thirty Christian titles, most of them suspense novels.
Terri has appeared on national television programs such as “The 700 Club” and “Home Life,” and has been a guest on numerous radio programs across the country. The story of her personal journey appears in books such as Touched By the Savior by Mike Yorkey, True Stories of Answered Prayer by Mike Nappa, Faces of Faith by John Hanna, and I Saw Him In Your Eyes by Ace Collins.
Other Reviews:
Legacy of a Writer
The Cross is All
Flair