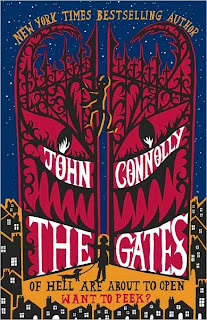 Title: The Infernals & The Gates

Author: John Connolly
Review: I think we can thank JK Rowling for making the youth literature market a viable option for authors by proving that kids will buy books, especially ones that tell a compelling story that doesn’t stoop to the lowest commoner denominator for laughs. Following the path of great mystery writers like John Grisham and Carl Hiassen, John Connolly has entered the market with the intrepid Samuel Johnson and his ever faithful dachshund Boswell as they battle the forces of evil embodied in cranky Mrs. Abernathy from down the road.
In book one, The Gates, The forces of evil have been stuck in their dimension (hell) for a very long time, but luckily for them modern science has unintentionally provided them with a way to earth. Specifically to 666 Crowley street. All that stands between them and world destruction is our hero Samuel. Through various battles with the help of his friends, and a helpful demon named Nurd, the scourge of five deities, the forces of evil our held at bay.

In book two, The Infernals, poor Sam and Boswell, as well as several other local residents are transported to hell wherein Mrs. Abernathy can seek her revenge and re-establish herself as demon number one. Of course everything doesn’t go to plan as Samuel and company do their best to hold her at bay and make it back home again.

Right from the start Connolly dismisses the concept of universal evil and shows his hell to be a mixture of the truly bad and the harmless lost. They may be a demon, but it wasn’t their choice, and if they get a vote they just soon keep quietly to themselves. My favorite parts of the books are the footnotes; and both books are riddled with them. There is a surprising amount of science packed into these stories, and each principle that is laid out (concisely, simply) usually has a corresponding footnote telling an interesting, and quite amusing side story. I expected to have fun reading these books, but I did not expect the education that I got with them as well.


This series is fun enough to entertain both adults and children, and as an added bonus you will gain a little scientific education too (unless, of course, you are already up on basic physics and Haldron colliders). Well worth the read while you await the next Heroes of Olympus book. Plus they would make an excellent children’s gift for this Christmas season (mine are off to my nieces as part of their gift).
Publisher: Atria Books
ISBN: Infernals 978-1-4516-4308-4
Gates 978-1-4424-2933-8
Copyright: Infernals 2011
Gates 2009
Pages: Infernals 309
Gates 293
Quick Review: 4 stars (out of 5)
Why I Read It: I enjoy John Connolly’s adult series of mysteries and wanted to try his youth orientated work.


Where I Obtained the Book: Sent to me by the publisher for review.
Synopsis:  The Gates: Young Samuel Johnson and his dachshund Boswell are trying to show initiative by trick-or-treating a full three days before Hallowe'en. Which is how they come to witness strange goings-on at 666 Crowley Avenue.


The Abernathys don't mean any harm by their flirtation with Satanism. But it just happens to coincide with a malfunction in the Large Hadron Collider that creates a hole in the universe, a hole through which can be glimpsed a pair of enormous gates.

The gates to Hell. And there are some pretty terrifying beings just itching to get out...
The Infernals: Samuel Johnson is in trouble. Not only is he in love with the wrong girl, but the demon Mrs Abernathy is seeking revenge upon him for his part in foiling the invasion of Earth by the forces of Darkness. She wants to get her claws on Samuel, and when the Large Hadron Collider is turned on again, she is given her chance. Samuel and his faithful dachshund, Boswell, are pulled through a portal into Hell, there to be hunted down by Mrs. Abernathy and her allies.


But catching Samuel is not going to be easy, for Mrs. Abernathy has reckoned without the bravery and cleverness of a boy and his dog, or the loyalty of Samuel's friend, the hapless demon Nurd. Most of all, she hasn't planned on the intervention of an unexpected band of little men, for Samuel and Boswell are not the only inhabitants of Earth who have found themselves in Hell.

If you thought demons were frightening, just wait until you meet Mr. Merryweather's Elves.. 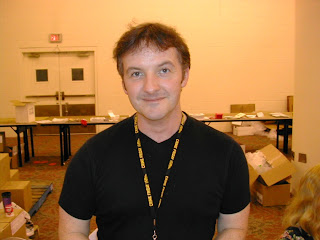 Author Biography: John Connolly is the author of "Every Dead Thing" which was a bestseller in Britain and Ireland. He is a regular contributor to "The Irish Times," and has traveled extensively in the United States. He lives in Dublin, Ireland.

My Shelf Confessions
The Guilded Earlobe
Journey of a Bookseller

FYI: Short clip of Connolly reading a sample of The Infernals (Called Hells Bells in England)