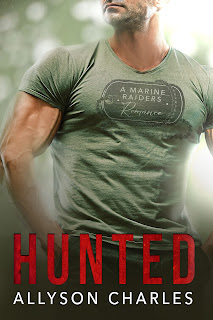 Hunted started off quickly pulling readers in wondering where the story would go.  To this readers disappointment the story soon falls on the sword of typical romantic suspense where the romance takes and the two lead characters end up in a push pull relationship that is unbelievable.

The author uses a lot of inner monologues to tell the story from different point of views that doesn't move the story along.  The middle of the story slow to a snail's pace leaving readers to choose to keep reading or leave the story behind.

Pushing though the story it ends like it expected leaving this read very unsatisfied.

Thank you to Netgalley for advance copy of Allyson Charles Hunted.

A tough special forces operator who’s never run from a fight. A woman about to give him the biggest battle of his life.

Marine Raider Jake Skinner has a nose for trouble. He never expected to find it in a beautiful woman adrift at sea. But once he has her in his arms, he knows he’s never letting her go.

Caroline only had one rule when it came to dating – no military men. When the sexy Marine pulls her from the ocean, her resolution goes to war against his resolve to break through her walls – and goes against her own secret longings.

As a drug cartel sets its sights on Caroline, Jake is determined to move heaven and earth to keep her safe. But if Caroline can’t learn to trust her heart, it could spell the end for them both.

Meet the men of Alpha Squad. Protective, strong-willed, and tough, they go hard after what they want. And when they set their sights on a woman, they’ll use every weapon in their arsenal to make her theirs.

Allyson Charles writes small-town, contemporary romances with heat and humor. A former attorney, she happily ditched those suits and now works in her pajamas writing about men’s briefs instead of legal briefs. When she’s not writing, she’s probably engaged in one of her favorite hobbies: napping, eating, or martial arts (That last one almost makes up for the first two, right?). She also writes steamy historicals as Alyson Chase.