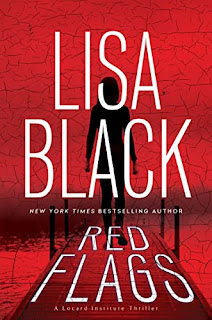 This is the first book from Lisa Black that I have read and thankfully it is the start of a new series by this author.

This is an interesting start to a new series and the author focusing a little too much on the online safety and protecting children. The author loves her forensic science and readers who love the CSI side of mysteries will love all the accepts the author puts into her story.

Even if readers are hit over the head with online safety the story is a fast-paced thriller that will have readers invested with finding the missing child a in hopes of a happy.

With all the positive and a little negative this is a good beginning to a new series.

When D.C. crime scene analyst Dr. Ellie Carr is called to investigate the heartrending case of a missing baby, she’s shocked to discover that the child’s mother is her own cousin. Close during their impoverished childhoods, Ellie and Rebecca eventually drifted apart. Rebecca is now half of a Washington power couple, and she and her wealthy lobbyist husband, Hunter, have been living a charmed life in an opulent mansion—until their infant son is taken.“Every contact leaves a trace.” That’s the basic principle of forensic science followed by pathologist Dr. Rachael Davies. A reluctant Ellie is teamed with Rachael, employed by Hunter to help with the investigation. Rachael is assistant dean at the prestigious Locard Forensic Institute, named in honor of the French criminologist who inspired the profession. But in this case, discovering where those traces lead quickly becomes a dangerous journey through a web of greed and deadly ambition.At first antagonists, then allies, Ellie and Rachael race to find the baby alive and bring the kidnappers to justice. What seemed like a simple ransom grab reveals links to a lobbying effort to loosen regulations on a billion-dollar gaming empire. Unless they can piece together the evidence before the Senate hearing, Rebecca’s son—and others like him—will face an unthinkable fate .

Lisa Black spent the happiest five years of her life in a morgue. Strange, perhaps, but true. After ten years as a secretary, she went back to school to get a Bachelor’s degree in Biology from Cleveland State University. In her job as a forensic scientist at the Cuyahoga County Coroner’s Office, she analyzed gunshot residue on hands and clothing, hairs, fibers, paint, glass, DNA, blood and many other forms of trace evidence, as well as crime scenes.She had her life sorted out just the way she liked it until her husband got fed up with Cleveland snow and moved them to Florida, 1400 miles away from her family and her career. Not that she’s bitter or anything. Now she works as a Certified Latent Print Examiner and Certified Crime Scene Analyst for the city of Cape Coral, Florida, police department.Lisa has lectured at writer’s conventions and appeared on panels. In her life as a writer she’s a member of Sisters In Crime, Mystery Writers of America and International Thriller Writers. In her life as a forensic specialist she’s a member of the American Academy of Forensic Scientists, the International Association for Identification, and the International Association of Bloodstain Pattern Analysts. She has had over 1050 hours of instruction in forensic topics and has testified in over 60 trials.