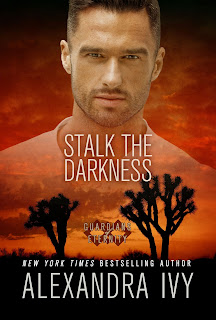 I will be honest I am a fan of Alexandra Ivy romantic suspense series and have read a few of her Guardians of Eternity.  The author created a supernatural world that is just about believable as if you could see yourself in the world she created for her readers.

I haven't kept up with the series and only bounced from different books in this series.  It took a little time for me to figure out who was who but after a few chapters it was easy enough with the authors ability to pull in a few other backstories from the other books.  Different characters from past stories are brought into Stalk the Darkness.  The story moves quickly and with an imaginations readers will love the different supernatural creatures from didn't lore's.

The ending was very abrupt and tied up in a nice little bow for readers.  That being said I could have been drawn out a little more giving reader a more complete ending.

Becoming a vampire nearly killed Satin. After decades in hiding to reach fighting strength, she swore never to be weak again. Instead, she flings herself into the joys of life. Like “combat practice” with Marco, the owner of the wildest club outside of Chicago. Getting a workout with the sizzling Were is the ultimate no-strings-attached pleasure. Until a chaos-strewing demon leaves Satin with an impossible, infuriating diagnosis: Vampires don’t get pregnant.Marco prides himself on being the perfect Were—strong, savage, and barely housetrained. But with Satin gone on her mysterious quest, he’s compelled to follow. This raven-haired warrior might be his mate for all eternity. But a dark presence hovers around her. If Marco and Satin can’t solve its riddle in time, there won’t be any future to worry about .