Book Review: All the Broken Girls by Linda Hurtado Bond 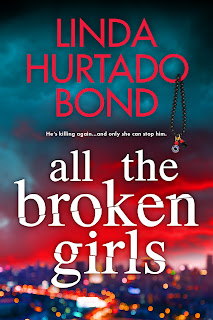 Title:  All the Broken Girls

Lina Hurtado Bond creates a mystery using the Cuban culture in Florida as the black drop and several characters that readers will hope will come back for another book by the author.

The story doesn't as well as others author as the story slows down and speeds up giving readers a little whiplash.  In the end the story is a whodunit that readers of mystery and a romance will want to get their hand on this book.  Hope for more.

Thank you to Netgalley for the Advance copy of All The Broken Girls.

Crime reporter Mari Alvarez was never able to solve her mother’s murder ten years ago. But when a woman is gunned down on the doorstep of her West Tampa neighborhood, Mari can’t shake the eerie sense of connection.The others will breakNow there have been two murders in two days. Each crime scene awash with arcane clues—and without a trace of DNA from the killer. And for each victim, a doll. The first is missing an eye. The second is missing a heart. But are these clues leading to the killer…or messages for Mari?Unless she plays the game...Caught up in a maelstrom of Old-World superstition, secrets, and ties to her own past, Mari has only one option. Put the puzzle together before someone else dies—even if it destroys her career. But there’s no escaping the hungry spider’s web when it’s been made just for you…

Author Linda Hurtado Bond is an Emmy award winning TV news anchor and an author of romantic thrillers.She’s worked as a television news reporter and anchor in Fort Myers, Orlando and Tampa Florida. For the past twenty years, she’s shared important information with viewers on the latest medical breakthroughs and has written emotional, human-interest stories on those who have the courage and spirit to fight for their lives.She writes every day, under deadline, but has always loved losing herself in a good fiction story. Her love for writing fiction actually started in high school, but a thriving, busy professional life, along with five kids ( 2 step-kids, an adopted son from Cuba and 2 daughters ) kept her busy for many years.Entangled Publishing released three romantic adventures Alive at 5, Cuba Undercover and Flatline. Think James Bond meets Romancing the Stone. Cuba Undercover is based on her own true life love story.She has received numerous writing awards for Alive at 5 , Flatline and Cuba Undercover.Her latest book, All the Broken Girls, releasing in 2022, features two Cuban American characters and a deep dive into Cuban American culture.Linda has won 13 Emmy awards, numerous Society of Professional Journalist awards, Associated Press awards, as well as a Florida Bar award and an Edward R. Murrow award.This former baton-twirling beauty queen from The University of Georgia, now lives in Tampa Florida with her husband and kids.