Book Review: In the Pines (Mercy Kilpatrick #7) by Kendra Elliot 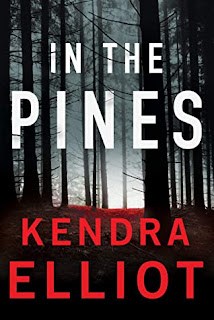 Title:  In the Pines (Mercy Kilpatrick #7)

I thought that Mercy Kilpatrick story was done and guess what she is back and better than ever! I love to see how the couple has moved forward in their lives raising two kids and lots of cats.

Treasure hunting make people do stupid things which includes murders and missing killer.  I have to admit Kendra Elliot at times had me wondering if she knew who the killer was as she was writing the story because nothing pointed to whom it was until she wanted you to know.

Mercy is still Mercy but has grown and changed as the stories have moved forward. Reader will love the changes that have happened to Mercy and excited to see what adventures are next.

The author brought back Evan Bolton and readers are going to hope for more stories featuring Evan in the future.

Zero Sexual romance 100% Mystery that readers will love. FYI yes there is swearing.

Thank you to Netgalley and publisher for advance copy of In The Pine by Kendra Elliot.

A national treasure hunt with a $2 million prize has driven obsessed fortune seekers to overrun the small town of Eagle’s Nest, Oregon. The hunt’s cryptic clues and the lure of wealth have exposed the desperate side of human greed: theft, fights, trespassing—and even the motive to kill. Police chief Truman Daly craves peace in his town but has a murder on his hands instead. Now the big prize isn’t the only thing hiding in the pines. So is a killer.When a young boy walks into the local café and claims his mother and baby sister have been missing for weeks, FBI special agent Mercy Kilpatrick investigates and exposes a disturbing twist in his story. Deep family secrets and lies that started sixty years ago have burst into the present, bringing with them deadly consequences.Mercy’s and Truman’s investigations lead down a path of murder, revenge, and buried secrets to uncover two intertwined mysteries as dark as an Oregon forest.

She grew up in the lush Pacific Northwest and still lives there with her family and three cats. She's fascinated with forensics, refuses to eat anything green, and dreams of living every day in flip flops. UPDATE: She now lives in flip flops and watches the sun rise over the ocean every day.