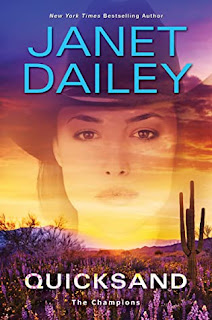 I didn't read the first 2 in the Champions series and the author does her best to update readers what happened in the other two bools while keeping the story moving forward.

Tess Champion is the female lead who is guarded and protective of her family.  Brock Tolman just wants to belong and help the Champion family once again as long as he can get closer to Tess.

Janet Dailey knows how to write a story that readers will hold on to years later after putting the book down.  Readers will fall in love with the Champion family as they come to life on the pages.

Quicksand is the perfect title for the story as reader will be pulled into the story unable to stop moving quickly though the story in hopes of finding the HEA.

Thank you to Netgalley for an advance copy of Janent Dailey Quicksand.

Tess Champion knows better than to trust Brock Tolman, the rancher who once swindled her late father in a land deal. But with the Alamo Canyon Ranch in foreclosure, Tess is forced to accept Brock’s offer of a partnership. Brock claims he only wants to breed the Champion bloodline into his own herd. In exchange, he offers Tess one of his own young bulls. Soon enough, Quicksand is the rising star of the rodeo circuit, which only proves Tess is better at picking bulls than she is men. Because she’s way too tempted to surrender to her attraction to Brock, despite her certainty he’s only out to steal her family ranch.It’s not until the tycoon’s private plane crashes in the wilderness, stranding him with Tess, that the truth of their relationship will come out. The Champion family’s future is on the line, but it’s Tess’s heart that will take the hit if she’s fallen for the wrong man.

Born in 1944 in Storm Lake, Iowa, she attended secretarial school in Omaha, Nebraska before meeting her husband, Bill. Bill and Janet worked together in construction and land development until they "retired" to travel throughout the United States, inspiring Janet to write the Americana series of romances, where she set a novel in every state of the Union. In 1974, Janet Dailey was the first American author to write for Harlequin. Her first novel was NO QUARTER ASKED.