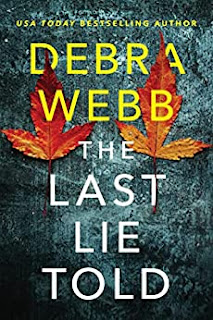 The Last Lie Told is the first of the Finely O'Sullivan series.  The author has the ability to tell a compiling story that will have readers questioning everyone Finley comes across even Finley herself at times.

I have to admit I am not a lawyer and yet at times I found that Finley seem to be breaking the law and will be protected because of who her family are.  Which can be frustrating at times because you will find you like Finley but using her family powers as a way to justify breaking the law.

This can be seen as the author knows little about being a lawyer.  Debra Webb is showing the world how she sees that if you have powerful family, they will protect you no matter what.

Thank you to Netgalley for the advance copy of The Last Lie Told.

Legal investigator Finley O’Sullivan searches for evidence the police overlooked, wading through secrets, lies, and betrayal to find answers. With the unsolved murder of her husband still very much on her mind, Finley must confront her own personal trauma on a daily basis. Lies are part of her livelihood, but they’re also the reason she can’t get justice for the man she loved.

When a man imprisoned for murder recants his confession, claiming he cleaned up the mess for his girlfriend—the victim’s own daughter—Finley takes on the case. She discovers the victim had identical twin daughters…and the sisters have very different accounts of the crime.

As she dives headlong into the twins’ traumatic past, Finley will have to contend with her own demons to get to the truth—before it’s too late.

Born in Alabama, Debra grew up on a farm. She spent every available hour exploring the world around her and creating her stories. She wrote her first story at age nine and her first romance at thirteen. It wasn’t until she spent three years working for the Commanding General of the US Army in Berlin behind the Iron Curtain and a five-year stint in NASA’s Shuttle Program that she realized her true calling. A collision course between suspense and romance was set. Since then she has expanded her work into some of the darkest places the human psyche dares to go.