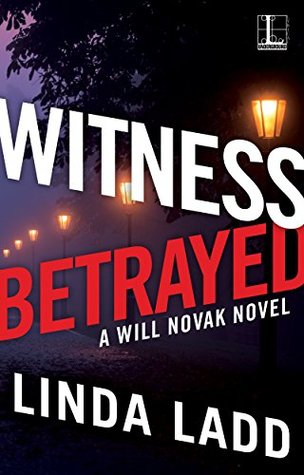 Review:
This is the first of the Will Novak Series as well as a first time read of Linda Ladd.  I was surprised how quickly as a readers I was pulled in unable to put the story down.
Will Novak is smart, quick and only to do what is right.
The characters jump off the page as readers can't get enough of the fast pace story.
Thank you to Netgalley and the publisher Lyrical Underground for the advance copy of Witness Betrayed By Linda Ladd

Synopsis:
NO FRIENDS
Mardi Gras whips New Orleans’ French Quarter into a whirlpool of excess, color, booze, noise, motion. So the woman in the sights of Will Novak’s binoculars stands out. She’s bruised, barefoot, wearing a man’s raincoat. And she’s looking right at him.

NO FAITH
In a moment she’s fleeing into the crowd, but Novak knows she’s not gone for good. When she comes back, it’s with a gun to his head—and a story about crony politics, a crooked judge, a kidnapped whistleblower, and children in deadly danger. Novak can’t let this one slide.

NO FURY
Through the grit of Houston’s underbelly to the grime below Beverly Hills’ glamor, a trickle of rot connects the powerful to the desperate and corrupts the men and women who are supposed to stand against it. Deceit is everywhere. If he’s going to do right, Novak is going to have to do it alone .

I love to write and I love to read.

I've written nine books in my detective mystery/suspense series featuring Homicide Detective Claire Morgan at Lake of the Ozarks in Missouri. Claire runs up against some very dark and disturbing serial killers in these books, but trust me, she can hold her own.  She also has a very devoted and good-looking man in her life by the name of Nicholas Black who helps her solve her cases.  I hope you'll get a chance to read them and will let me know what you think!

I guess my biggest fear is that nobody will show up for my book signings. : )

I also administer diagnostic developmental tests  to pre-schoolers (three and four years old), which is very rewarding and enjoyable.

I'm married to a wonderful man who is a  famous teacher in our town and the best carpenter around.  My daughter is also a fantastic teacher and a lovely person with the biggest heart in the world.  She is married to a crack attorney.  I have a son who is a CPA, and his wife is the comptroller of a bank.  I also have two beautiful little grandsons named William Tucker and Cooper Russell. They are the smartest kids I've ever encountered. : )

I love cryptograms, crosswords, scrabble, and any kind of word game or board game. I recently bought a game called Loaded Question, which is very interesting to play and gives players insight into how and what their friends and family think and feel. Apples to Apples is also a lot of fun, as is Catch Phrase.

I like playing tennis and sitting in my swing and gazing out over the lake. I do yoga to relax and love all Italian food, bar none. I collect Blue Willow dishes and etched crystal goblets. I especially love animals and have dogs and cats. I lost both my old dog and old cat within a 2-week period, and it nearly killed me. My pets are like members of my family. I'm a big University of North Carolina Tar Heels basketball fan, because Tyler Hansbrough is from my home town. Congrats to Tyler on all the awards he won there! He is awesome, as is his younger brother, Ben Hansbrough  who attended Notre Dame. They both played for the Indiana Pacers for awhile, but now Tyler is playing for the Toronto Raptors so I am now a big Raptors fan!   I also support the St. Louis Cardinals. GO CARDS!

I like Toby Keith because his videos usually make me laugh, and I love to laugh. I love Taylor Swift because she is a breath of fresh air and her music videos are romantic instead of vulgar. I like the new country and all the oldies goldies, but truth is I like just about any kind of music, except really, really high-pitched opera. Ouch!
I am absolutely obsessed with the TV show, Supernatural, which chronicles the hair-raising escapades of brothers, Dean and Sam Winchester.  Jensen Ackles and Jared Padalecki are superb actors, and if I wasn't under contract to write my Claire Morgan novels, I would beg producer Eric Kripke to let me become a writer on Supernatural!  His writers on that show are unbelievably talented.  Love the realistic dialogue!

I thought The Departed was beautifully written and acted. I recently enjoyed The Cider House Rules again. I thought Mystic River was very good, both the book and the movie. I liked Little Miss Sunshine, and I thought Elizabeth with Cate Blanchett was excellent. She should've won the oscar for that performance. I thought the Changeling was gripping and very well acted.

I enjoyed the Sookie Stackhouse novels by Charlaine Harris and watching the HBO series True Blood. I find it hilarious and think the cast and the casting are fantastic. After that, I have a stack of Philippa Gregory's historicals to read, as well as The Story of Edgar Sawtelle.
I also liked the Lord of the Rings and Star Wars movies. I loved all the Bourne films because I think Damon does an outstanding and realistic job as Jason Bourne, especially in The Bourne Identity.I like the crime shows, of course, especially the ones featuring real-life law enforcement officers. The First 48, Cold Case, City Confidential, Psychic Detectives, Haunting Evidence, all of them.  I love NCIS, but not as much as I did when Ziva David was a character on the show.  She was very interesting and her dynamic with Tony can never be duplicated.

I watch 48 Hours Mystery, Rome, and The Sopranos. I did not like the ending but thought it was clever to end it that way. I love The Tudors and Boardwalk Empire and Breaking Bad and Mad Men.  I also like Justified, Banshee, Dexter, and Duck Dynasty.

I am a HUGE fan of Lee Child and read all his books.  I love Jack Reacher--I would love for him to meet Claire Morgan.  Now that duo could create some fireworks!  ; )  I am now reading the Gods of Guilt  by Michael Connelly and have finished Jolie Blon's Bounce by James Lee Burke, both of which are excellent. I also enjoyed Whistling in the Dark by Lesley Kagen and Fatal Flaw by William Lashner. That was the first time I've read Lashner's work, and I really like his style, especially the humor.

Actually I've been reading a lot: The Ruins by Smith, The Road by McCarthy, Cage of Stars by Mitchard, The Innocent Man by Grisham, Water for Elephants by Gruen.

I am waiting impatiently for the new Robert Crais, Michael Connelly, Eileen Dreyer, John Connolly, and James Lee Burke. I admire so many authors, it's hard to narrow it down. I've been hearing some good things about Stephen King's new book and look forward to that, too.  I miss my friend, Beverly Barton, and her wonderful books.

I think our men and women fighting overseas to defend our country are the greatest heroes. They, and their families and loved ones sacrificing at home.

Also, the rescue workers after 9/11 and everywhere else. Pretty much all the doctors and nurses, too, and teachers, who are overlooked, underpaid, and under appreciated. And our law enforcement officers and fire fighters, who risk their lives for us every day.