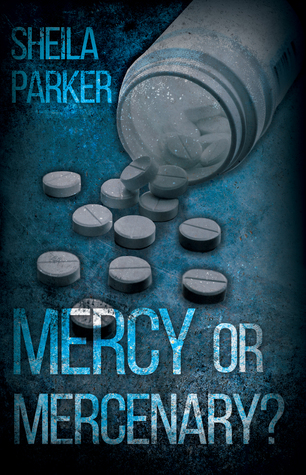 Mercy or Mercenary isn't a terrible read it just wasn't what I was looking for or thought was interesting. Everyone is a suspect which I guess you could compare the story to an Agatha Christie  novel expect I found it lack any interesting characters or though provoking reason for the murder.

I found it lacking the imagination of Agatha Christie as well as the creative writing style that comes with reading a Agatha Christie novel. I am a firm believe never compared a mystery to Agatha Christie because she holds one of the highest standards to my when it comes to a Who Done It type of murder mystery.
Grammar needs another once over an a little more editing before it goes to market.
I won't be picking up another book written by Sheila Parker because she lacked the focus and creative writing that is needed in a good Who Done It Murder Mystery.
Thank you to Netgalley and the publisher Troubador Publishing Limited
Matador  for an advance copy of  Sheila Parker Mercy or Mercenary

Synopsis:
Introducing a thought-provoking thriller, Mercy or Mercenary grabs the reader from the beginning with tight pacing and takes them on a heartstopping journey. Readers of Agatha Christie will enjoy this tense, clever story that will make you question what is morally right when faced with a degenerative illness like Alzheimer’s.

Ralph Maguire, aided by his friend, Duncan Sinclair, and loving wife, Isabel, is in the middle of writing the biography of well-known actor Leo Adare, despite suffering from advancing Alzheimer’s. In a shocking twist, Ralph is found dead and the post mortem reveals that he died from an overdose of his medication - yet it was impossible for him to get to the bathroom cabinet unaided. So who administered the dose...and why?

Detective Inspector Kershaw is called in, and as the investigation deepens, Isabel almost dies from food poisoning, Duncan is twice pushed into oncoming traffic by an unseen attacker, and Leo Adare’s nephew makes it very clear that he strongly disapproves of the biography that exposes Leo’s inner turmoil about his sexuality.

With the list of potential suspects growing by the second - including an out-of-the-blue illegitimate daughter with demands of her share of Ralph’s estate - Detective Kershaw is up to his neck in lies and deceit. To get to the truth, he must decide once and for all: mercy or mercenary killing...?