Review:
As a reader I am not much for Paranormal Romance books.  Every so often I figure why not try something different.
I was surprised how much I enjoyed Gabriel. The author brought two world together that were able to mash into mix of wonder, passion, adventure and romance.  Reader will be pulled into the world of Magic, vampires, Japanese mafia, and two enemies that have to work together to fight the darkest of evils.
The story will pull readers in with Hana who is devoted to someone she has never met but has seen every day of her life. Gabriel is a warrior from another times or place who has watched as Hana grown hoping to one day hold her. Each character is strong, has the ability to connect with readers.

The one down side is the endless pages of very graphic sex.  While I understand that sex is part of the paranormal romance or in fact all romance stories. The sex scenes take over a majority of the book that will leave some reader wishing for more background story, understanding of Hana's gift instead readers are giving a endless amount of biting, sex and graphic moments of blood.

I would have giving this book a solid 5 if the story could have had less sex and more Hana's magical gift and teaching of her powers.

Thank you to Netgalley and the publisher ImaJinn Books for the advance copy of D.B. Reynolds Gabriel.

Synopsis:
Gabriel Halldor. . . one of the fiercest warriors the world has ever seen, but his tremendous skill can’t save him from a sorcerer’s curse. Trapped in stone and left lying in darkness for thousands of years, he is, at long last, brought into the sunlight of a Japanese garden, where a young girl comes to sit at his feet and read him stories as she grows to womanhood.

Hana Himura. . . beloved granddaughter of a Japanese mob boss, raised to the life of a warrior. When death comes for her grandfather, he sends her to the one guardian courageous enough to protect her from a sorcerer who will stop at nothing to have her.
Raphael. . . the most powerful vampire lord on earth, and the only man who can save Gabriel and Hana from an enemy who would enslave them both.
Running from the certain death that awaits them in Japan, Hana and Gabriel flee to Malibu and the vampire lord her grandfather called friend. Raphael is magic and power combined, and Gabriel and Hana will need both if they’re going to survive long enough to defeat their enemy and light the flame of desire that’s been simmering between them for years.
Expected publication: October 30th 2018 by ImaJinn Books 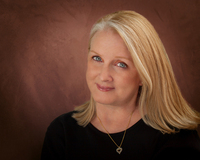 D.B.Reynolds is the RT and EPIC award-winning author of the popular Vampires in America series, as well as other paranormal fiction. She lives in a flammable canyon near Los Angeles, and when she's not writing her own books, she can usually be found reading someone else's.