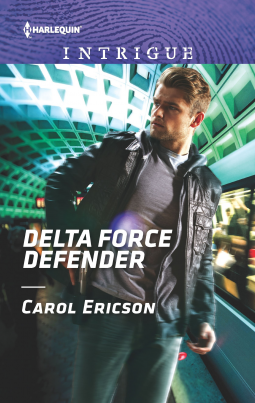 Review:
This wasn't an easy book to read to be honest.  The synopsis sounded interesting and every so often Harlequin has some really good Intrigue stories but this one has me scratching my head.
Cam Sutton comes out of now where and decides to help the CIA translator Martha Drake who's fathers past and her looks have her question everything that comes out of the handsome Delta Forces mouth.
Everything about this book comes of as personal attacks to each other Martha who is wealth and well educated and Cam who is the opposite and can't read due to his dyslexia.  Martha has a lack of self confidence and Cam thinks she is hot and is attracted to a Intelligence than looks.
Most of the story about them trying to figure each other out and less about why someone is after Martha or his Military commander.  There is sex but honestly it is really uncomfortable and removes readers from the adventure or the person who is trying to destroy everything about Martha and the life she created.
The story has a moral to it don't judge a book by its cover but it gets lost in the all inner monologue and awkward moments.

Synopsis:
Fiery, independent Cam Sutton will go to any length to prove his Delta Force mentor isn’t a terrorist—even bully the CIA into giving him the damning emails. But by-the-book CIA translator Martha Drake already knows the evidence is fishy, and it’s somehow connected to the recent attempts on her life. Soon the strong, capable soldier is her protector…and inciting a passion neither can deny. But will Cam still want to be her teammate once the real traitors are brought to justice?

https://www.amazon.com/default/e/B001KC6B5K?redirectedFromKindleDbs=true
Posted by H. Wimmer at 12:00 AM