Book Review: Watched From a Distance (Love Under Fire #3) by Allison B. Hanson 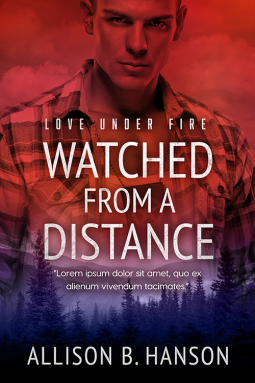 Title: Watched From a Distance (Love Under Fire #3)

Review:
The one down fall of this series is when you see how many chapter are in the book but when you realize the chapters are short it makes for a fast read.
The story starts off with a bang well at least to the head that is.  I wouldn't call this a stand alone novel because it bring in characters from the other books but at the same times they are secondary characters that backgrounds are covered in this story quickly.
With this series there is steamy scenes, romance, guns and lots of fighting.  Moms who are romantic suspense readers will contact quickly with Lena Scott characters and cheer when she wins the battle.

I enjoyed this book and the fast pace and quickly writing will keep readers wanting more.  The story seems to have moments of not sure where it was going and the ending was wrapped up in a nice little bow.

Thank you to netgalley and the publsher Entangled Publishing, LLC (Amara) for the advance copy of Allison B. Hanson Watched From a Distance.

Lena Scott is in a world of hurt. She’s being forced to pay off her ex’s  to people who’d rather kill her than look at her…and are making demands she’s desperate to avoid. But kidnapping and murder? Hell, no. When the threats turn deadly, Lena refuses to be a pawn any longer.
Five years ago, U.S. Marshal Dane Ryan  his old life and went into witness protection alone to keep his  safe. Working for Task Force Phoenix under a new identity, it’s his job to protect others from those who’d harm them.
When the beautiful and mysterious Lena lures him into danger, he suddenly doesn’t know who to trust. She has her own agenda, and they both have big secrets, but for either to survive, they’ll need to work together to defeat their mutual enemy. Falling in love will only mean more to lose…
ebook
Expected publication: September 24th 2018 by Entangled Publishing, LLC (Amara)

One very early morning, Allison B. Hanson woke up with a conversation going on in her head.  It wasn’t so much a dream as being forced awake by her imagination. Unable to go back to sleep, she gave in, went to the computer, and began writing.  Years later it still hasn’t stopped.
Allison lives near Hershey, Pennsylvania. Her contemporary romances include paranormal, sci-fi, fantasy, and mystery suspense.  She enjoys candy immensely, as well as long motorcycle rides, running and reading.
https://allisonbhanson.wordpress.com/
Posted by H. Wimmer at 12:00 AM