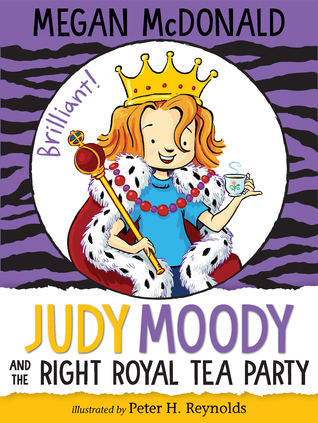 Review:
(9 Year old Review of the book)
How can someone not like Judy moody books.  They are the best.  I think it was super funny, and I liked Judy the best but man what does she call her? hum nemesis Jessica is really mean.  I really liked the book and I can't wait to read more of the books.  Thank you to who gave the book to my mom and for me to read. I love Judy Moody she is funny, and likes to have fun and I like reading.

Mom's turn
The story is perfect for 6-11 year old girls to read.  It is under 200 pages but your girls will love the story and be able to connect with the different characters and what they are going though.

Synopsis:
Judy Moody is in a royal purple-mountain-majesties mood. Make that Majesty with a capital M! With Grandma Lou's help, Judy has dug up proof that some old-timey Moodys (aka the brave Mudeyes) lived in merry olde England. In fact, if her grandpa's notes are right, Judy might even be related to -- royal fanfare, please -- the Queen herself! Should Judy start packing her purple robe for a sleepover at Buckingham Palace? But then Judy's family tree gets a few more shakes -- thanks to her nemesis, Jessica "Fink" Finch -- and some more surprises come tumbling out. Crikey! These new gems are not nearly as shiny or sparkly as the crown jewels. Now Judy has some right royal family secrets she'd like to keep hidden away in a dungeon somewhere -- and especially away from Jessica, the princess in pink herself!

"Sometimes I think I am Judy Moody," says Megan McDonald, author of the Judy Moody series, the Stink series, and THE SISTERS CLUB. "I'm certainly moody, like she is. Judy has a strong voice and always speaks up for herself. I like that." For Megan McDonald, being able to speak up for herself wasn't always easy. She grew up as the youngest of five sisters in Pittsburgh, Pennsylvania. Her father, an ironworker, was known to his coworkers as "Little Johnny the Storyteller." Every evening at dinner the McDonalds would gather to talk and tell stories, but Megan McDonald was barely able to get a word in edgewise. "I'm told I began to stutter," she says, leading her mother to give her a notebook so she could start "writing things down." Critically acclaimed, the Judy Moody books have won numerous awards, ranging from a PUBLISHERS WEEKLY Best Book of the Year to an International Reading Association Children's Choice. "Judy has taken on a life of her own," the author notes, with nearly 3 million Judy Moody books in print. Interestingly, the feisty third-grader is highly popular with boys and girls, making for a strong base of fans who are among Megan McDonald's strongest incentives to keep writing, along with "too many ideas and a little chocolate." And now -- by popular demand -- Judy Moody's little brother, Stink, gets his chance to star in his own adventures! Beginning with STINK: THE INCREDIBLE SHRINKING KID, three more stories, and his own encyclopedia, STINK-O-PEDIA, Stink's special style comes through loud and strong -- enhanced by a series of comic strips, drawn by Stink himself, which are sprinkled throughout the first book. About the need for a book all about Stink, Megan McDonald says, "Once, while I was visiting a class full of Judy Moody readers, the kids, many with spiked hair à la Judy's little brother, chanted, 'Stink! Stink! Stink! Stink! Stink!' as I entered the room. In that moment, I knew that Stink had to have a book all his own."More recently, Megan McDonald has recalled some of her own childhood with the warmth, humor -- and squabbles -- of three spunky sisters in THE SISTERS CLUB.Megan McDonald and her husband live in Sebastopol, California, with two dogs, two adopted horses, and fifteen wild turkeys that like to hang out on their back porch.
Posted by H. Wimmer at 12:00 AM