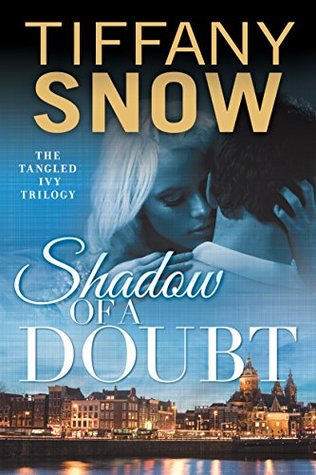 Title: Shadow of a Doubt
Author: Tiffany Snow
Received for an honest review - Sent to me from Publisher for Advance Review
Stars: 5 out of 5
Review:
I have a Hate Love relationship with this book. I when I first started to read the book I fell flat for the first 35%. Ivy had zero backbone when it came to Devon she would say one thing and do the other which drove my crazy and I also didn't want to finish the book because of that. She would have sex with him and than question their relationship deciding she wouldn't follow him blindly and than she would follow him. She would stop having sex with him only to have sex with him because she needed him or sex I wasn't quite sure because I was getting really bored of Ivy. Devon however I wanted to follow his story more. I wanted to know where he was going, who he was talking to and why he had such loyalty to Vega and the Shadow. (You get a small glimpse towards the end.)  Instead I read how Ivy triped, fell, prostituted herself and how Devon loved her to the point of wanting to kill or kill anyone who touched her.
Thankfully the action picked up and I found I couldn't put the book down Ivy came out swinging bringing an energy with her that she really needed in the first half of the book. The roller coaster the author takes you on is great and is about 45% into the book with the highs of chases, actions and overwhelming odds to the quite moments where you learn more about Devon and his past. I wish the quite moments were less sexual encounters and thankful that changes somewhat when Ivy says no to sex. (Well she kind of says No but changes her mind.)
Tiffany Snow knows how to write sex scenes, chase scene and she has a way of painting scenes that make the book come to life. She also know how to play with the readers emotions keeping them on the hook until the very last word is read.
The book started off slow but soon found its tempo creating a world of spies, adventures, tournament souls, and hope. As I finished the book I found myself not wanting it to end. I needed answers that I know will be answered. As I had hoped with the end of the last book Ivy did gain a voice but she would push it aside for Devon. She is much stronger than she was in the first book but still a little weak for me. I am hoping Ivy is able to stand up on her own two feet without anyone's help in the third and final book.
I love the action, spy stuff, chase scenes and others scenes I wish I could tell you but it would ruin the book. Lets just say you will sigh and than bite you nails.
I hated Ivy moping around, wondering if Devon really loved her and what her future would be like with him when Devon told her many times what the future held for them.
If you like Tiffany Snow books this is a must read.

Synopsis:  Ivy Mason has it all: beauty, a plush apartment, a fancy car, and a debonair British spy boyfriend who pays all her bills. If only her boyfriend was in her life—and her bed—more than just sporadically.

Part of an underground British agency called the Shadow, Devon Clay knows that secrecy is what has kept him alive. Anyone he loves is a liability, and being involved with him puts the other person in grave danger. Yet Ivy is someone his heart can’t resist.

When an enemy from Devon’s past returns, the spy and his girlfriend are thrown headlong into an international conspiracy that puts everyone Ivy loves at risk. From the Missouri River bottoms to the brothels of Amsterdam, Ivy and Devon must outrun and outmaneuver the forces allied against them, and no one can be trusted.

Author Information:  click on the link.
Posted by Unknown at 12:00 AM