Winner of the signed book - Luker - Thanks for all the entries 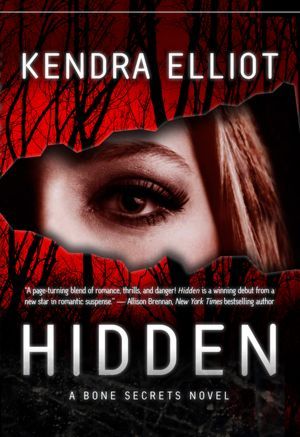 Title: Hidden (Bones Secret #1)
Author: Kendra Elliot
Stars 4 out of 5
Review:
I have never read a book by Kendra Elliot but she came up as suggestions for me to read so I thought why not I'm not sleeping at night. The entire series is on kindle unlimited.
With all recent romantic suspense novels each character is either damaged or carrying around enough baggage to make a sane person run for the hills. Dr. Lacey Campbell, a forensic odontologist (I had to look this job up) is  requested at a rundown apartment building where she finds bones from a ten year old murder of her best friend. The owner of the building  ex-cop Jack Harper finds himself thrown into a murder investigation he was apart of ten years earlier.  While the story keeps you on your toes there is a lot of steel blue eyes, "clean male" scent and "cut abs" from Lacey and Jack isn't left out because he appreciates all of Lacey's curves "in all the right places,". You begin to wonder if they remember that they are standing at a murder site.
Along with the cut abs your get several different points of view from all the characters. Most authors seem to have a problems keeping all the POV and characters flowing but I give Kendra props because I never once got lost with all the POV. In fact I loved seeing and hearing everyones POV when it came to the murder investigation.
This book is your typical Romantic Suspense with happily ever after but let me tell you getting there was on heck of an adventure that kept me up into the late night wondering who would be doing this and why.  If you always wanted to see what it would be like if Linda Howard wrote a little dark this is your chance with Kendra Elliot.
The Covers for the series are amazing and even if the story was crap I have to give the author 5 our of 5 Stars for the beautiful covers.

Thanks to Heidi for this review.

Now a forensic odontologist analyzing teeth and bones for the state medical examiner, Lacey is devastated when she identifies Suzanne’s remains at a crime scene. She finds comfort in the arms of ex-cop Jack Harper, and sparks fly between them even as a new reign of terror begins. Someone is killing the witnesses who sent the Co-ed Slayer to prison a decade ago. All the evidence points to the Co-ed Slayer as the culprit, only he’s long since dead. So who’s the new killer? And is Lacey next in line to die?

Author Information:  Kendra Elliot grew up in the lush Pacific Northwest and still lives there with her husband, three daughters, two cats, and a Pomeranian. She's fascinated with forensics, refuses to eat anything green, and loves a strong Mai Tai on the beach on Kauai.

The CALLAHAN & McLANE novels are a spin-off of the Bone Secrets books. VANISHED, BRIDGED, and a third book coming summer of 2015.