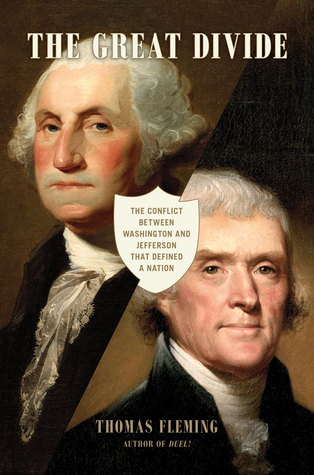 Title:  The Great Divide: The Conflict between Washington and Jefferson that Defined a Nation

Review:  I was intrigued by the title and subject matter and therefore sat down to read this book with anticipation. I thoroughly enjoyed the authors writing style and the subject matter. He spends a good story and makes it seem believable. While I do not doubt that there was a conflict between Washington and Jefferson I saw nothing that would convince me it was as bad as the author would have you believe. Nor do I believe that Jefferson was as bad in making decisions as you would be led to believe. He may have not been the best president but neither was he a fool. I would consider this to be an example to revisionist history writing. I would read this book for entertainment but would not consider it to be accurate by any means. When writing about events that took place over 200 hundred years ago you can make the facts (and I use that term loosely) say anything you want.

I received this book as an ARC from Net Galley. I would rate it at 3 stars.

Synopsis:   A conflict between George Washington and Thomas Jefferson? Most Americans are unaware of this historical reality. History tends to cast the early years of America in a glow of camaraderie, but there were many conflicts between the Founding Fathers—and none more important than the clash between Washington and Jefferson. Their disagreement centered on the highest, most original public office created by the Constitutional Convention: the presidency. It also involved the nation’s foreign policy, and the role of the merchant, the soldier, and the farmer in a republic. At its root were two profoundly different visions of America’s future.

In The Great Divide, acclaimed historian Thomas Fleming examines how the differing character and leadership styles of Washington and Jefferson shaped two opposing views of the presidency—and the nation. The clash between these two gifted men, both of whom cared deeply about the United States of America, profoundly influenced the next two centuries of the nation’s history and persists to the present day.

Author Information:   Thomas J. Fleming is an historian and historical novelist, with a special interest in the American Revolution. He was born in 1927 in Jersey City, New Jersey, the son of a World War I hero who was a leader in Jersey City politics for three decades. Before her marriage, his mother, Katherine Dolan Fleming, was a teacher in the Jersey City Public School System.
After graduating from St. Peter's Preparatory School in Jersey City, Fleming spent a year in the United States Navy. He received a Bachelor's degree, with honors, from Fordham University in 1950. After brief stints as a newspaperman and magazine editor, he became a full-time writer in 1960. His first history book, Now We Are Enemies, an account of the Battle of Bunker Hill, was published that same year. It was an instant success, reviewed in more than 75 newspapers and featured as a main selection of the Literary Guild.
Since then, Fleming has published numerous books about events and figures of the Revolutionary era. He has also written about other periods of American history, and has published more than twenty novels, including several best-sellers, set against various historical backgrounds.
Fleming lives in New York with his wife Alice, a distinguished writer of books for young people. The couple has four children and seven grandchildren.