Review: I have never bought a gossip magazine like US or People, but like
most people when I am in a waiting room I can’t help myself and dig into
them.  Our relationship with celebrity is so unique that it is hard to
explain.  On the one hand we feel above the fray but then when faced with
temptation we dig right in.  True Hollywood Noir is an extremely
fascinating look into some of the more notorious criminal cases of the
golden age of Hollywood (except for the Robert Blake case which is more
recent).

What was truly interesting about these cases was how the powers that be
dealt with them.  When presented with a dead person (whether those present
made the dead or found them that way) the first inclination would be to
protect the movie studio above all else, including finding out who actually
killed the person.  So instead of the cops they would call their lawyer and
then together they would clean up the crime scene making sure to remove any
incriminating evidence.  The amazing thing was for the most part law
enforcement went along with it, or at least the people involved got away
with it.

All twelve cases are presented with what is known, and then some insight
and/or gossip about the main players involved.  Generally all the chapters
will not convince you of any one’s definitive guilt but they will leave you
questioning the status quo.  It will give you something to think about.

For me the weakest supposition is the death of Natalie Wood being something
more then she fell into the water and drowned.


Also the last chapter digs into the life of Mickey Cohen, the famous LA
based mob boss.  Through extensive interviews with his right hand man Jimmy
Smith you get a new view of the man that isn’t generally shown.  While
Cohen did do some very bad things in his life (which isn’t contended) you
do learn that like all human beings he was not completely one sided.  He
was capable of loyalty and kindness and by his own contention he only
killed people who needed killing.  So what you get is a portrayal of a very
complex individual much more fascinating than the typical caricature given.
True Hollywood Noir is a morbidly interesting book looking into the great
crimes of early Hollywood.  Well worth the read.

Synopsis: A tantalizing mixture of classic Hollywood nostalgia and true
crime, True Hollywood Noir: Filmland Mysteries and Murder, featuring 100
rare photographs, is suspenseful, entertaining, and eminently readable.
Uncover true stories of mystery and murder in a dozen different chapters
featuring William Desmond Taylor, Thomas Ince, Jean Harlow, Thelma Todd,
Joan Bennett, Lana Turner, George Reeves, Gig Young, Bob Crane, Natalie
Wood, Robert Blake, and Mickey Cohen. Included in the cast of characters of
this book are Johnny Stompanato, William Randolph Hearst, Marion Davies,
and Charlie Chaplin. And find never before told mob stories about Ben
"Bugsy" Siegel, Virginia Hill, and a host of notorious underworld figures.
From 1922 until 2001, explore some of Filmland's most fascinating
mysteries, scandals and murders true Hollywood noir lived by the players
behind the scenes. Each chapter dissects the various theories in each case,
but it is up to you to make up your own mind. From the West Coast mob and
city corruption intertwining with Hollywood mysteries on and off the
screen, to the plots of noir films pulled from actual happenings in the
underworld, get the stories behind the stories, the darker images playing
out in living color behind the silver screen. While most of the actors
featured here met with untimely tragic deaths or notorious misfortune
coloring the remainder of their lives, the talent of these highly creative
individuals and the legacy they've left us gives them a timeless
immortality. 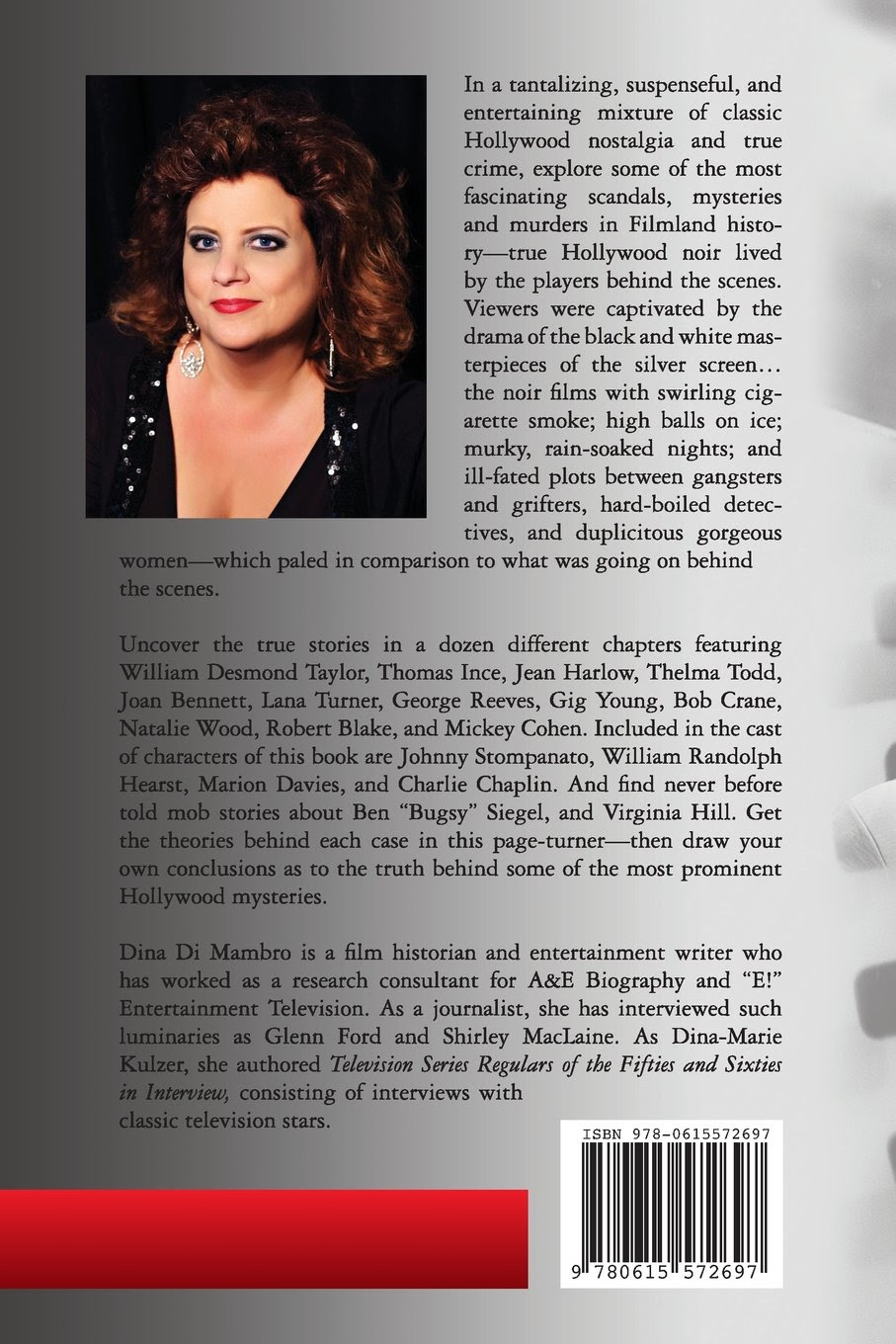 Other Reviews:
Lesa's Book Critique
Rough Edges
Posted by Unknown at 12:00 AM