Book Review: The Wolf is Mine by Paige Tyle 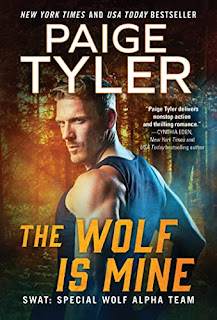 Title: The Wolf is Mine

I have read several of the SWAT series by Paige Tyler and I have to admit this might be one of my favorites.  If you have read the series, I think this just might be the book you have been waiting for and I bet you already knew that cat wasn't really a cat!

There is sex but push that all away the story and characters are well developed.  The author is bringing in more supernatural characters into her stories and the wolves are discoveries make it entertaining.

Paige Tyler has created sexy supernatural world that comes to life with each different romantic story.

The "The One" does get old after a while but it is what connects all the books in Paige Tyler series.

Thank you to Netgalley for advance copy of Paige Tyler The Wolf is Mine.

The stakes are higher than ever in the newest installment of Paige Tyler's thrilling and sexy paranormal SWAT series. What can a werewolf do to win the woman he knows is his fated mate?Werewolf Connor Malone and his SWAT team are in San Antonio looking for their teammate. But Connor can't stop worrying about his cat who went missing the morning he left Dallas. His furry friend has been by his side since he found her a year ago, and the fact that she's disappeared is weighing on him. Things get much worse when he and his team realize they're up against a powerful creature they might not be able to defeat...Back in Dallas, Connor's feline friend turns out to be the powerful woman who introduces herself as Kat Davenport...a witch who needs the SWAT team's help to defeat the wicked warlock who cursed her. And when she and Connor are thrown together again, there will be no denying the connection they already share, and the white-hot chemistry that sizzles between them.

Paige Tyler is a New York Times and USA Today Bestselling Author of sexy, romantic suspense and paranormal romance. She and her very own military hero (also known as her husband) live on the beautiful Florida coast with their adorable fur baby (also known as their dog). Paige graduated with a degree in education, but decided to pursue her passion and write books about hunky alpha males and the kick-butt heroines who fall in love with them.