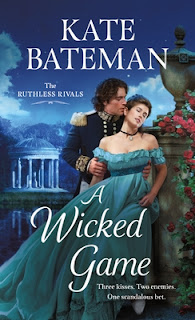 The third book by Kate Bateman detailing the romantic interactions between the Davies and Montgomery families. After a feud that lasted years the young unweds on both sides appear to have taken a strong liking to each other. While trying to be aloof and ignore the mutual desires they find themselves drawn even closer to each other.  This book, like the two before, A Reckless Match and A Daring Pursuit, draws the reader more deeply into both families. The author displays a talent that is able to follow a common theme but at the same time broaden the readers desire to learn more about the families interactions. I have reviewed all three of these books and rate this one 4 stars.

I received an ARC from Netgalley for my unbiased review.
Thank you, Frank for your Reviews

If there’s one thing impossible for a Davies to resist, it’s a challenge from a Montgomery. . .A teasing bet.Shipwrecked and imprisoned thanks to an incorrect map, Captain Morgan Davies has returned to London to exact sweet revenge on the cartographer responsible for his suffering. He’s also vowed to claim the winner’s prize―three kisses―in the bet he made with his long-time nemesis, the prickly, smart-mouthed Harriet Montgomery. His incarceration has clarified his feelings for her, but convincing the infuriating woman he wants to marry her is going to be his greatest challenge yet. When Harriet’s revealed to be the very mapmaker he seeks, Morgan decides to combine revenge and seduction into one delightful package. . .A dangerous enemy.Harriet’s always wanted witty scoundrel Morgan, and now he’s back; as handsome and as taunting as ever. She has enough on her plate dealing with her father’s failing eyesight and a rival mapmaker copying her work to play wicked games with a dastardly Davies―however tempting he might be. But when a threat from Morgan’s past puts them both in danger, Harry discovers that she and Morgan might not be enemies at all . . .