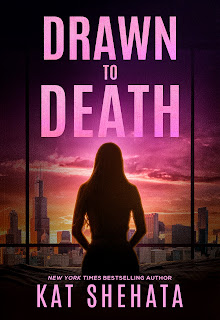 This is the first book I have read by Kat Shehata. The author created an interesting story where a woman medium who has ghost who use her to solve her murder. Leo is pretty much a typical cop in a romantic suspense story.  He is skeptical but is willing to listen to Evelyn to solve the murders.

Yes the two characters are also romantic interest for each other so yup sexy time happens. If you don't not want graphic sex scenes just skip this book.  That being said the story is interesting and reader will find it difficult to put down the mystery needing it to be solved.

Thank you to Netgalley for advance copy of Drawn to Death.

Ghosts visit Evelyn in her dreams. The secrets of the dead could get her killed.The city is ripe with crime, and the freshly dead need help solving their murders. Evelyn is a reluctant medium who channels the dead through her art.Leo is a skeptical homicide detective who believes in evidence, facts, and witness testimonies—when the information comes from the living, not the dead.When a ghost feeds Evelyn clues about a string of unsolved murders, she teams up with Leo to track down the serial killer.The romantic tension sizzles when Evelyn and Leo go undercover as a couple to lure the killer into a trap.But when Evelyn gets too close to the case, and the handsome detective, her life is in danger when she becomes the latest obsession of the Windy City Stalker.

Kat is a New York Times Bestselling author—with the help of a psychic.After teaming up with world-renowned psychic Sylvia Browne, Kat co-wrote and published Animals on the Other Side. The book was a hit and landed on the New York Times Bestseller list. Kat and Sylvia went on to publish and promote three more successful titles, and the books were all featured on The Montel Williams Show.Kat’s writing career took a romantic turn when a love story about a mob boss and a troubled young woman wouldn’t get out of her head. After spending years writing The Russian Tattoos Trilogy, a new couple, Evelyn and Leo, the main characters of Drawn to Death, demanded her attention.When Kat is not reading or writing romantic suspense, ghost thrillers, or murder mysteries, she enjoys long walks and traveling with her husband. She splits her time between Cincinnati, Ohio, and Boca Raton, Florida.She holds a bachelor’s degree in theatre from Wilmington College, a professional writing certificate from the University of Cincinnati, and a master’s degree in creative writing from Spalding University. She has won two Benjamin Franklin Awards and Killer’s Nashville’s Claymore Award for Best Suspense.