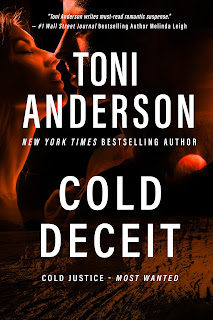 I will start off this review with I have read everything Toni Anderson and written.   Cold Deceit is hands down one of the best book she has written.  I found myself wanting to savory the story because I knew it would end all too soon. Zoe is strong, she doesn't want what she was born into to replace what she desires to do in life. Seth Hopper is Zoe superhero.

What sets this story out from others is when the characters know they said something to upset the other they would try to figure out what it was and how to correct what caused the hurt feelings.  The relationship developed fast and yet with the way the characters communicate and the way the author has written the characters the HEA makes 100% since.

Cold Deceit is the perfect blend of romance, action, suspense and characters building.  Hand down the best book I have read by Toni Anderson.

Thank you to Toni Anderson for an advance copy of Cold Deceit.

When forensic anthropologist Zoe Miller stumbles across a murder victim in the blisteringly hostile Sonoran Desert, she triggers a chain of events that puts her in the crosshairs of a ruthless killer.FBI HRT operator Seth Hopper is on secret assignment near the Mexican border when he suddenly finds himself on a rescue mission. The former Navy SEAL is ordered to protect Zoe, whether she likes it or not, which sets them off on a cross-country journey back to Virginia.Zoe has good reason not to trust a man like Seth, but there is no denying the scorching heat that flares between them, hotter than the desert sun. Can Zoe find justice for the murdered woman? Or will the killers close in to destroy them both…

Toni Anderson writes gritty, sexy, FBI Romantic Thrillers, and is a New York Times and a USA Today bestselling author. Her books have won the Daphne du Maurier Award for excellence in Mystery/Suspense, the Readers' Choice, Aspen Gold, Book Buyers' Best, Golden Quill, and National Excellence in Romance Fiction awards. She’s been a finalist in both The Vivian Contest and the RITA Award from the Romance Writers of America. Her books have been downloaded more than two and a half million times.Best known for her Cold Justice® books perhaps it’s not surprising to discover Toni lives in one of the most extreme climates on earth--Manitoba, Canada. Formerly a Marine Biologist, she still misses the ocean, but is lucky enough to travel for research purposes. In January 2016, she visited FBI Headquarters in Washington DC, including a tour of the Strategic Information and Operations Center. She hopes not to get arrested for her Google searches.