Book Review: The Killer In Me by Max Manning 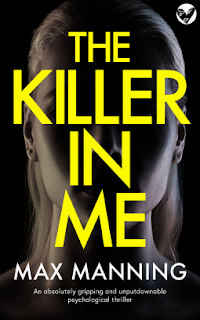 Title: The Killer In Me

Max Manning created a compelling story psychological thrillers that will stay with readers long after they put the book away. The characters are well developed, and reader will wonder if Liv Marsh is a psychopath as she researches her sister's death.

Book lovers of psychological thrillers will want to put this at the top of there to be read file.

Thank you to Netgalley for advance copy of Max Manning The Killer In Me.

Everything changes when you find out what you really are.Liv Marsh is still grieving the death of her sister, killed in a hit-and-run. The driver confessed and was convicted, but he’s going to be released from prison any day now.Soon he’ll walk free while her sister is dead.Liv is struggling with that knowledge when suddenly her world turns upside down.Liv volunteers to take part in a study of the brains of violent criminals, as a control sample of a ‘normal’ brain. That’s when she learns she has all the classic abnormalities of a high-level psychopath.Suddenly Liv’s head is crowded with possibilities. Dark thoughts. Twisted opportunities. Maybe it’s time to embrace her secret self.Maybe finding out she’s a psychopath is the push she needs to exact revenge . . .What would you do?

Max Manning is a former national newspaper journalist. He started his career as a news reporter on regional newspapers before moving on to Fleet Street. There he worked for several titles, including Today and the Daily Express. He later joined the staff of the Daily Telegraph where he worked for sixteen years as a news sub-editor. Now You See is his debut crime novel.