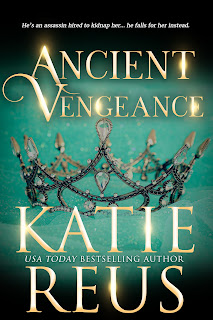 I will start off with Katie Reus is a go to author for me so the second I get a chance to review one of her books I jump.  I also love the cover of this book in the Ancient Rising series.

Ancient Vengeance is part of a series supernatural series that will become colorful as readers start with book 1 in the series. That being said readers can jump in with book 6 or book 2 as they can be read as standalone novels.

The story is everything you expect from Katie Reus; Romance, action, sexy time, feisty strong female leads and overprotective male characters. The world the author has created in one where supernatural roam the world of humans. The balance they have created is constantly being tested and once again being tested.

The story is face pace supernatural romance that will leave readers happy they dove headfirst into Katie Reus world.

Thank you to Netgalley for the advance copy of Ancient Vengeance.

She’s been sheltered her entire life…Stella is from a fierce and ancient dragon line, but when her kingdom was invaded and half her family slaughtered, everything changed. She’s been taught to fight, to protect herself, but now that one of her sisters is back after being thought dead, she realizes it’s time to make some changes. After years of being smothered, she needs freedom, to spread her dragon wings and experience life. So when her grandmother tasks her with a job in New Orleans, she jumps at the chance to strike out on her own and prove herself.He's never met anyone like her…Dragon shifter Rhodes is a killer. An assassin. And he’s been ordered to kidnap the dragon princess Stella as vengeance against her clan. He’s always finished his contracts—until he meets her. Now he’ll do anything to keep her safe. To claim her forever as his mate. But first they’ll have to overcome the danger stalking her—and then he’ll have to figure out how to get her to forgive him for betraying her.

Katie Reus is the New York Times and USA Today bestselling author of the Red Stone Security series, the Redemption Harbor series and the Deadly Ops series. She fell in love with romance at a young age thanks to books she pilfered from her mom's stash. Years later she loves reading romance almost as much as she loves writing it. However, she didn't always know she wanted to be a writer. After changing majors many times, she finally graduated with a degree in psychology. Not long after that she discovered a new love. Writing. She now spends her days writing paranormal romance and sexy romantic suspense.
Posted by H. Wimmer at 11:00 PM