Book Review: Lie To Her (Bree Taggert #6) by Melinda Leigh 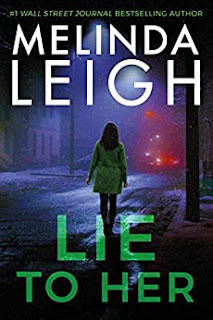 Melinda Leigh is hands done one of my top 10 authors of all times.  The mysteries are interesting keeping wondering what will happen next. What I think Melinda Leigh excels at is her ability create characters readers are able to connect and cheer for.  Lie to me is a can't miss addition to the Bree Taggert series.

Thank you to Netgalley and the Author for a advance copy of Lie to Me!

When a digital marketer is found murdered in his backyard—hands bound and face smothered by plastic wrap—Sheriff Bree Taggert and criminal investigator Matt Flynn respond to the call. Their investigation focuses on the man’s dating-app profile and the word liar carved into his forehead.One day later, the killer strikes again.Both victims are players in the internet dating scene. In their wake, they leave a trail of hurt—and angry—women. But Bree and Matt aren’t convinced the motive is as simple as it appears. Everyone they interview seems to be lying or hiding something.As the list of suspects grows, the killer’s rage escalates, and he leaves a personal and deadly warning for Bree. They must act fast. Because someone Bree loves is targeted as the next to die.

#1 Wall Street Journal and #1 Amazon bestselling author Melinda Leigh is a fully recovered banker who learned that writing books is way more fun than analyzing financial statements. Melinda’s debut novel, SHE CAN RUN, was nominated for Best First Novel by the International Thriller Writers. Since then, she has garnered numerous writing accolades, including two RITA® Award nominations and an induction into the NJ Romance Writers Hall of Fame. Her novels have sold more than 10 million copies across the world. Melinda loves martial arts, rescue dogs, and sea turtles