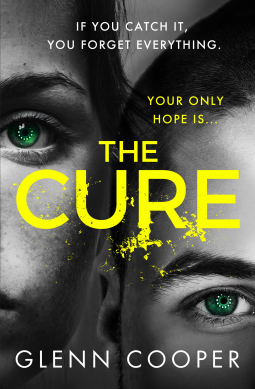 The synopsis of The Cure had me excited to see what this new author might be able to come up with.

The story doesn't deliver what it promises to.  The plot goes from interesting to confuted within the first few chapters. The author uses more medical and pathogen verbiages that will have the more die hard Medical thriller fan scratching their head wondering if they need a PhD to read this book.  Glenn Cooper falls into using stereotypes as a way to describe characters, scenes as well as the plot that went from wahoo to what the crap am I reading?

The story ends in a cringe worthy story that can be thrown in the trash can when done.

Thank you to Netgalley and the publisher for the advance copy of Glenn Cooper The Cure.

He wanted to cure Alzheimer's Disease...Single parent and neurologist Dr. Jamie Abbott makes a key contribution to treating Alzheimer's Disease. But the principal investigator short-circuits the study safeguards, releasing a highly contagious virus that wipes the host's memories. His daughter is one of the first victims.With only half of the cure, he's got no choice but to travel...As the virus spreads and civil order breaks down, Jamie embarks on a perilous cross-country journey. He needs to reach his lover, virologist Dr. Mandy Alexander. She has the other half of a potential cure.If he fails, he'll lose his daughter and leave most of mankind to the oblivion of total amnesia.

Glenn was born in New York City and grew up in nearby White Plains. He attended White Plains High School before enrolling at Harvard University in Cambridge, Massachusetts where he graduated from Harvard with an honors degree in archaeology. He then attended Tufts University School of Medicine and did his post-doctoral training at the New England Deaconess and the Massachusetts General Hospitals becoming a board-certified specialist in Internal Medicine and Infectious Diseases. After practicing medicine, Glenn began a research career in the pharmaceutical industry which culminated in an eighteen-year position as the Chairman and CEO of a biotechnology company in Massachusetts. Glenn began writing screenplays over twenty years ago and his interest in movies prompted him to attend the graduate program in film production at Boston University. He is currently the chairman of a media company, Lascaux Media, which has produced three independent feature-length films. In 2006 Glenn turned his hand to novel-writing. His debut novel, THE LIBRARY OF THE DEAD, the first in a trilogy, became an international bestseller and was translated into thirty languages. All of his seven published books have become top-ten international best-sellers.Glenn currently lives in New Hampshire.