Book Review: Trust No One (Devlin & Falco #1) by Debra Webb 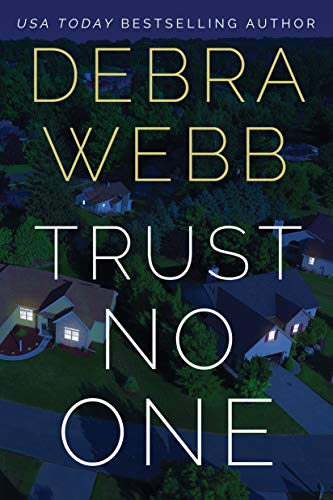 Debra Web bring together a pair of police detectives that are about to take on the dark seedy underbelly of their city while trying to figure out this new partnership.

Trust No One is your typical conspiracy thriller but with the flare of Debra Webbs characters that are both honest and true to the person they become.

The story has it moments of Oh Crap as well as yea I saw that coming.  the character development from Detective Kerri Devlin and her martial issues that feel so personal readers will feel her pain.  The personal issues that will almost take Kerri Devlin to her knees only brings her back fighting harder for the truth.

Trust No One isn't just a dark conspiracy thriller on politics but has head soul and love that readers will not be able to get enough.

Thank you to the Netgalley and the publisher for the advance copy of Debra Webb Trust No One.

It’s the worst possible time for Detective Kerri Devlin to be involved in an all-consuming double-homicide case. She’s locked in a bitter struggle with her ex-husband and teenage daughter, and her reckless new partner is anything but trustworthy.Still, she has a job to do: there’s a killer at large, and a pregnant woman has gone missing. Once Devlin and her partner get to work, they quickly unearth secrets involving Birmingham’s most esteemed citizens. Each new layer of the investigation brings Devlin closer to the killer and the missing woman, who starts looking more like a suspect than a victim.But just as answers come into view, the case twists, expands, and slithers into Devlin’s personal life. There’s a much more sinister game at work, one she doesn’t even know she’s playing—and she must unravel the truth once and for all to stop the killer before she loses everything

With more than four million books in print in numerous languages and countries, Debra’s love of storytelling goes back to her childhood when her mother bought her an old typewriter in a tag sale. Born in Alabama, Debra grew up on a farm. She spent every available hour exploring the world around her and creating her stories. She wrote her first story at age nine and her first romance at thirteen. It wasn’t until she spent three years working for the Commanding General of the US Army in Berlin behind the Iron Curtain and a five-year stint in NASA’s Shuttle Program that she realized her true calling. A collision course between suspense and romance was set. Since then she has expanded her work into some of the darkest places the human psyche dares to go