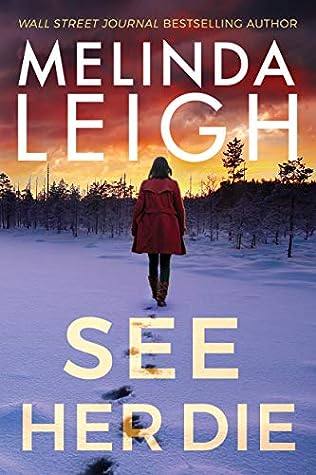 Review:
What make Melinda Leigh a amazing mystery writer.  The stories she creates are always moving forward the characters fears from the first book to the next showing the growth the characters create!
Each characters has a heart a soul that comes to life off the pages.  Readers will root for Bree and the family she is now taking care of as well as those she surrounds herself with.
The dark past is what keeps her moving she tries hard to find peace with her family, create a life as a care taker and help her brother who is lost in his mind at times.

This series isn't a stand alone but the author is able to bring readers up to speed without slowing down the story.
Another Can't Miss Series!!
Thank You to Netgalley for the advance copy of Melinda Leigh See Her Die.

Synopsis:
New sheriff Bree Taggert is called to a shooting in a campground shuttered for the winter. But she arrives to find a perplexing crime. There is no shooter, no victim, and no blood. No one but Bree believes the sole witness, Alyssa, a homeless teenager who insists she saw her friend shot.

Bree calls in former deputy Matt Flynn and his K-9 to track the killer and search for Alyssa’s friend. They discover the battered corpse of a missing university student under the ice in Grey Lake—but it’s not the victim they were looking for.

When two more students go missing and additional bodies turn up, Bree must find the link between the victims. She knows only one thing for certain: the murders are fueled by rage. When Alyssa disappears, Bree must race against time to find her before her witness becomes another victim.

About The Author:
#1 Wall Street Journal and #1 Amazon bestselling author Melinda Leigh is a fully recovered banker who learned that writing books is way more fun than analyzing financial statements. Melinda’s debut novel, SHE CAN RUN, was nominated for Best First Novel by the International Thriller Writers. Since then, she has garnered numerous writing accolades, including two RITA® Award nominations and an induction into the NJ Romance Writers Hall of Fame. Her novels have sold more than 7.5 million copies across the world. Melinda loves martial arts, rescue dogs, and sea turtles.
Posted by H. Wimmer at 12:00 AM