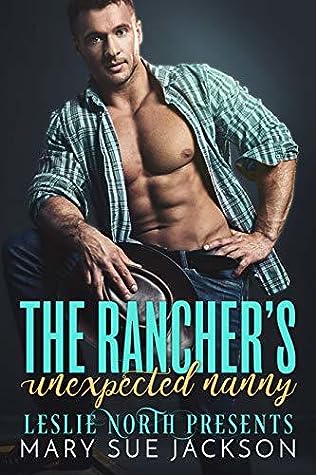 Review:
The book is a simple romance.  Of a man who is selfish and can't move beyond his loss than making out with his daughter kindergarten teacher\nanny.  The story move quickly the characters are ok nothing stands out they blend into the background of the story that lacks any get up and go.
The story moves slowly from page to page as the characters are on a page.
The Rancher's Unexpected Nanny is a forgettable romance for a reader who needs something to read between flights.
Thank You to Netgalley and the publisher for the advance copy of Mary Sue Jackson & Leslie North The Rancher's Unexpected Nanny

Synopsis:
Finn Henry was once a rodeo star. That was, until life happened. His wife was expecting, his father in law was injured, and the family ranch needed someone at the helm. There seemed no choice but to retire from glory and move back to their hometown to raise their family. When Finn’s wife died suddenly just three years later, it seemed like their twist of fate had given him the twist again: all his dreams were dead. To compensate he’d thrown himself into ranching—losing himself in the grief. Callie Winter, has landed her dream job moving to the east coast to work for a prestigious private school, but she’s fallen in love out west...with an adorable kindergartener. Wendy Henry has imprinted on Callie and Callie is scared she’s imprinted right back. Callie knows she should head out in June and get settled out east, but then she finds herself offering her services as a summer nanny after one too many parent teacher conferences gone badly with Finn. Callie’s excuse is to earn the extra money she needs to rent a home in the historical area around the school...but the reality may be that it’s harder to leave the pair than she ever expected. Callie’s goal for the summer is to reunite father and daughter so that she can leave and know that the two of them have bonded again. However, as they learn to live together, Callie finds that she’s more involved than ever, as she learns to love the stoic rancher. Suddenly, she’s wondering if maybe her dream isn’t her dream anymore...but is Finn ready to open his heart again?

About The Author:
New Pen Name for Leslie North
Leslie North is the pen name for a critically-acclaimed author of women's contemporary romance and fiction. The anonymity gives her the perfect opportunity to paint with her full artistic palette, especially in the romance and erotic fantasy genres. The truth of the matter is she loves her fictional persona, Leslie North, more than her normal, day-to-day persona! Her bestselling books focus on strong characters and particularly women who aren't afraid to challenge an alpha male. Inspired after years of travel, her stories are set all over the world, from the tough streets of Russia to the beautiful beaches of the middle east. Leslie fell in love with romance when she first picked up a scrappy, dog-eared romance book from her local library. She began writing soon after and the rest, as they say, was history. She now lives in a cozy cottage on the British coast and enjoys taking long walks with her two Dalmatians, George and Fergie. She LOVES reader feedback, and if you have any comments, don't hesitate to contact her on Goodreads.
Posted by H. Wimmer at 12:00 AM