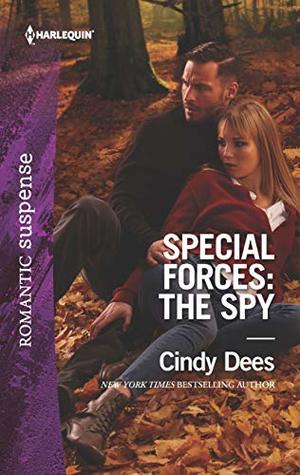 Review:
Cindy Dee writes a decent romantic suspense story for the summers.  Readers can start with this book and know what will happen from beginning to end.  The author has a fake rap scene but the female characters still feels the same emotions.  The author creates a likable female lead woman can bound with.  The Zane the male lead is strong but weak as well which creates a blend of two decently written characters.
The story moves quickly and finished with what readers have come to expect with Harlequin Suspense books.
The story is a easy fast read but also easily forgettable unless you are a fan of Cindy Dee.
Thank you to Netgalley and the publisher Harlequin Suspense for the advance copy of Cindy Dee Special Forces: The Spy

Synopsis:
The Mission Medusa series continues…To maintain his cover, spy Zane Cosworth kidnaps Medusa member Piper Ford. She might be trained to endure a hostage situation, but when one of her kidnappers continues to protect her from harm, she finds herself losing her heart. They flee for their lives, and the lines between enemy and lover begin to blur. But will they survive long enough to explore this new passion?

indy Dees started flying airplanes while sitting in her dad’s lap at the age of three and got a pilot’s license before she got a driver’s license. At age fifteen, she dropped out of high school and left the horse farm in Michigan where she grew up to attend the University of Michigan.After earning a degree in Russian and East European studies, she joined the U.S. Air Force and became the youngest female pilot in the history of the Air Force. She flew supersonic jets, VIP airlift and the “C-5” Galaxy, the world’s largest airplane. She also worked part-time gathering intelligence. During her military career, she traveled to forty countries on five continents, was detained by the KGB and East German secret police, she got shot at, flew in the first Gulf War, met her husband and amassed a lifetime’s worth of war stories.Her hobbies include professional Middle Eastern dancing, Japanese gardening and medieval reenacting. She started writing on a one-dollar bet with her mother and was thrilled to win that bet with the publication of her first book in 2001.
Posted by H. Wimmer at 12:00 AM