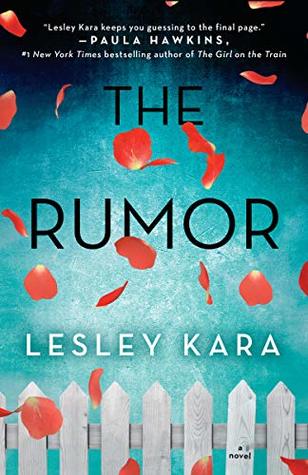 Review:
Lesley Kara debut novel The Rumor is a story is like the game we all played as kids Telephone. The story works well enough as the rumor of someone around them is a killer.  It is easy to figure out if you are a mystery reader.  The author will try to throw readers off with her mildly interesting twist and red haring.
The story is ok paced but slows down from time to time than picks right back up.  The story is ok and if you are not a fan of mystery novels this would be a great start.
Thank you to Netgalley and the publisher Ballantine for the advance copy of Lesley Kara The Rumor.

Synopsis:
Joanna is desperate to ingratiate herself with a popular clique of mothers at her son's new school. But when she tries to impress them by repeating a rumor she overheard at the school gates, there's no going back. . . .

Rumor has it that a notorious killer, a woman who has been released from prison years after her brutal crime, is living under a new identity in Joanna's seaside town. So who is the supposedly reformed murderer now living in their neighborhood? Suspicion falls on everyone.

Joanna becomes obsessed with the case, pawing through decades-old records in an attempt to name the killer. But her curiosity not only ostracizes her from the community, but exposes her son and his father to a heartless psychopath who has killed--and may kill again.

How dangerous can one rumor become? And how far will Joanna go to protect those she loves from harm, when she realizes what she's unleashed?

Joanna is going to regret the day she ever said a word..