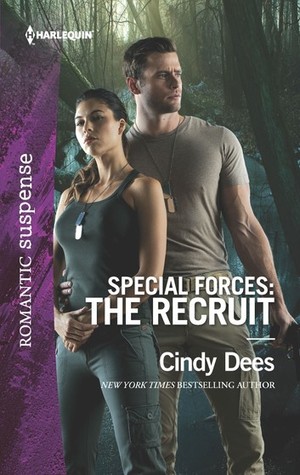 Review:
Cindy Dees creates a new series Mission  Medusa but the book is what I have always avoided Harlequin Romantic Suspense series.  The story is all about sexual tension and sex and less about the character development and the reason why the female lead is determined to be the best of the best.
The story is wash, rinse and repeat over and over until the last 20% of the book when the action takes place.
The story is a insta romance with a little story and action thrown in.
Thank you to Netgalley and the publishers for the advance copy of Cindy Dees Special Forces The Recruit.

Synopsis:
a Medusa—part of an elite, women-only Special Forces team. But all the mental prep and physical training in the world can’t prepare her fully to take on one of the world’s most dangerous men. The ultimate operative, Tessa teams with trainer Beau Lambert to track her target, but even if she survives, will her heart?

Cindy Dees started flying airplanes while sitting in her dad’s lap at the age of three and got a pilot’s license before she got a driver’s license. At age fifteen, she dropped out of high school and left the horse farm in Michigan where she grew up to attend the University of Michigan.After earning a degree in Russian and East European studies, she joined the U.S. Air Force and became the youngest female pilot in the history of the Air Force. She flew supersonic jets, VIP airlift and the “C-5” Galaxy, the world’s largest airplane. She also worked part-time gathering intelligence. During her military career, she traveled to forty countries on five continents, was detained by the KGB and East German secret police, she got shot at, flew in the first Gulf War, met her husband and amassed a lifetime’s worth of war stories.Her hobbies include professional Middle Eastern dancing, Japanese gardening and medieval reenacting. She started writing on a one-dollar bet with her mother and was thrilled to win that bet with the publication of her first book in 2001.
Posted by H. Wimmer at 10:50 AM