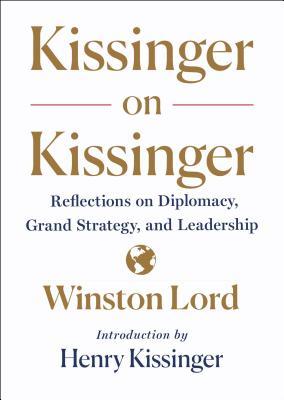 Review:
This is a very short read for a man who transformed diplomacy in a cold war area.  Henry Kissinger gives a insight into the world he created during a time of political unrest.  Kissinger has an amazing understand of history and how the world painted him in history books.
The book is written as though it is a interview with topics and questions he answers and reflect on.
Henry Kissinger is a man of man talents and at the time he was able to use those abilities to create and direct a world or guide the world as he saw it needed to be.
Winston Lord was very open and honest at the beginning of the book allow readers to know what he went though interview the 90 + year old the great Henry Kissinger.  This is a simple short oral report on the history of the many events Kissinger to part in.
Thank you to the Publisher All Point Books and Netgalley for the advance copy of Henry Kissinger  Kissinger n Kissinger

Synopsis:
As National Security Advisor to Richard Nixon, Henry Kissinger transformed America's approach to diplomacy with China, the USSR, Vietnam, and the Middle East, laying the foundations for geopolitics as we know them today.Nearly fifty years later, escalating tensions between the US, China, and Russia are threatening a swift return to the same diplomatic game of tug-of-war that Kissinger played so masterfully. Kissinger on Kissinger is a series of faithfully transcribed interviews conducted by the elder statesman's longtime associate, Winston Lord, which captures Kissinger's thoughts on the specific challenges that he faced during his tenure as NSA, his general advice on leadership and international relations, and stunning portraits of the larger-than-life world leaders of the era. The result is a frank and well-informed overview of US foreign policy in the first half of the 70s--essential reading for anyone hoping to understand tomorrow's global challenges.


Hardcover, 176 pages
Expected publication: May 14th 2019 by All Points Books

Elder statesman, political scientist, diplomat, and geopolitical consultant who served as United States Secretary of State and National Security Advisor under the presidential administrations of Richard Nixon and Gerald Ford.
Posted by H. Wimmer at 12:00 AM